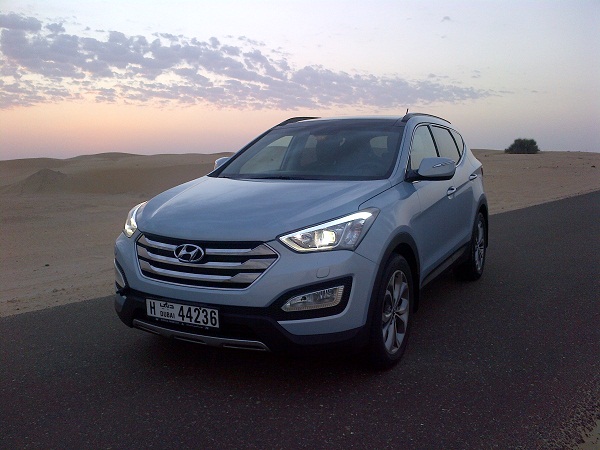 The 2013 Hyundai Santa Fe had a reputation as a practical and affordable family SUV, but one that lacked style. The Korean carmaker has attempted to alter that perception by giving the third generation of the seven-seater a radical overhaul.

It has certainly succeeded in changing the image, as the Fluid Sculpture exterior design concept is a vast improvement. The 4x4 now boasts some nice curves, along with sporty lights, a hexagonal grill and a rear spoiler, which combine to give it a look similar to some of its rivals with more prestigious badges.

The big question is whether Hyundai has managed to give the Santa Fe a makeover without compromising on the practicality that made earlier models of the SUV such a tempting choice.

The new Santa Fe is available with two different engines. The GL models come with a 2.4-litre version, while the GLS cars have a 3.3-litre V6 which gives an extra 90 hp.

Hyundai has redesigned the engines so that they feature a piston cooling jet to improve reliability and performance. It has also used a number of integrated components to make the engines lighter and shaved off further weight by reducing the capacity of the fuel tank to 64 litres, helping to improve economy but more trips at the pump.

We drove the top-of-the-range 14A GLS and were impressed with the way it handled urban and highway driving. It has more than enough power to cope with those conditions and combines well with the six-speed automatic gearbox to give a smooth drive.

The handling is good, which is no surprise given the model we tested has motor driven power steering. Although the ride is firm-ish, it is comfortable enough on the road.

However, it is less impressive in off-road conditions. The Santa Fe has always been a family car with seven seats, rather than a genuine all-terrain SUV, and the makeover has confirmed that status. Ground clearance is now 15mm lower, so you really do have to avoid any menacing dunes. Maybe you might be able to get away with low-level wadi cruising but nothing more than that. 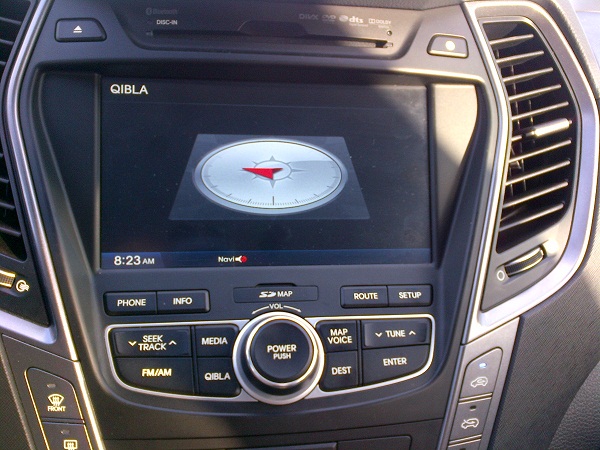 The second generation Santa Fe's greatest strength was that it was a genuine seven seater, making it the perfect choice for families and transporting groups of colleagues around. If anything, the seating has improved in the third generation, with extra headroom and legroom in the second row.

As with many mid-sized seven-seaters, a lack of boot space is a problem. With all the seats up, you can just about fit in one upright suitcase, but you can add room by folding down the third row of seats when they are not needed.

The interior of the new Santa Fe is a big improvement on its predecessor and we particularly liked the larger screen. While there are still some cheap plastics to be found, the overall feel is one of an upmarket vehicle.

Defying expectations, the SUV is very well equipped. All models have air conditioning, cruise control, central locking, a radio/CD player with steering wheel controls and keyless entry. The top-of-the-range 14A GLS we drove had just about every option, including a nifty “Qiblah” feature that tells you the direction of Mecca for Muslims who want to pray while travelling. Very useful, I can tell from my personal experience.

The new Hyundai Santa Fe is as practical as ever, as well as being much more stylish - both inside and out - than its predecessor. It is a genuine alternative to some of the more expensive seven-seat SUVs on the market, as long as you don't plan to do much off-road driving.

Price has always been a big selling point for Hyundai and that continues with the third generation Santa Fe, particularly if you opt for the well-equipped entry-level model at 82,900 AED. The 14A GLS we drove was superbly kitted out but costs 122,900 AED, so unless you desperately want a rear camera, sat-nav system and leather seats, the basic option seems better value for money.

Finally, the big question surrounding Hyundai is that of reliability. It takes time to build a reputation of reliability as Japanese competitors like Toyota Rav4 and Honda CR-V have established over the years. Hyundai with it’s major improvements, revamped styling and updated technology presents stylish, cool cars but time will tell how the resale value fluctuates over time.