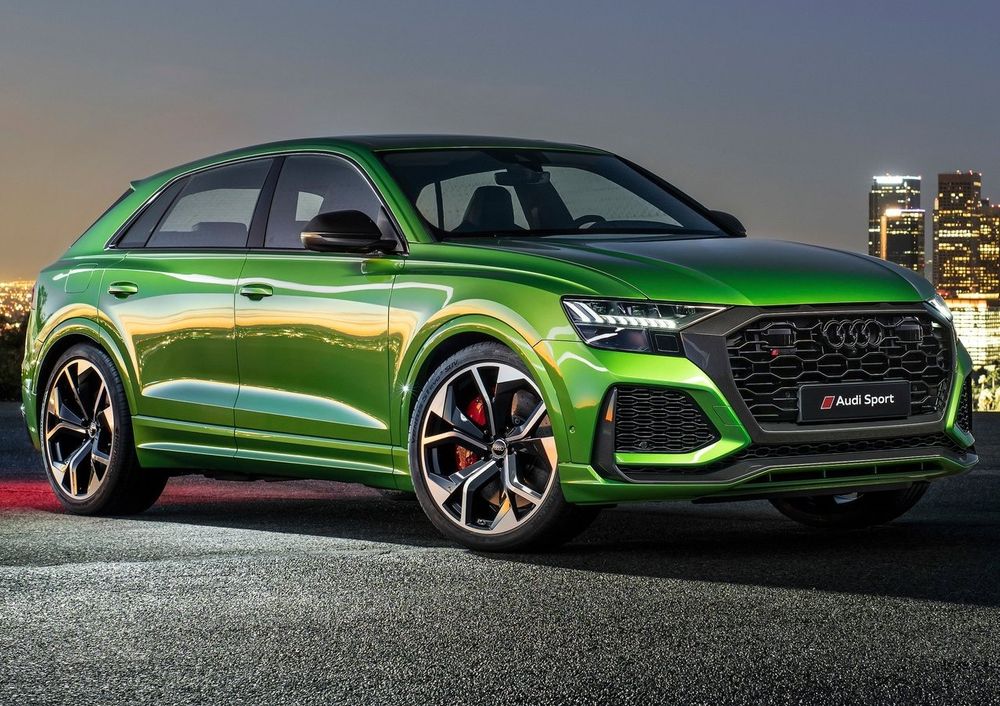 Audi had first released its brand-new and highly-anticipated Q8 flagship not too long ago -- in fact, it was launched back in 2018. While the regular Audi Q8 starts from around AED 320,000 in the UAE, its sportier and flashier RS avatar hasn’t even the playing fields yet. Still considered a midsize luxury crossover, the Audi RS Q8 represents the model’s top-tier trim.

The posh German automaker unveiled the RS Q8 officially at the Los Angeles Auto Show back in November 2019, and this was now the most expensive version of the Q8 - even trumping the already costly SQ8. As for its immediate rivals, the 2020 Audi RS Q8 will go up against cars like the Porsche Cayenne Turbo, BMW X6 M, Lamborghini Urus and Alfa Romeo Stelvio QV.

When it comes to the design of the Audi RS Q8, it is almost similar in its overall form-factor as its regular Q8 sibling. However, the German brand has put in much effort to try and make the RS variant look far more special - something that does reflect sans much difficulty. In fact, it is not only longer and slightly wider than the standard Q8 but also sits lower to the ground as well.

However, the biggest change comes from all the fancy RS touches that Audi has applied onto this SUV. It starts with the more aggressive-looking front end which now gets glossy black finish on the large grille, along with glossy black areas on the sportier bumper such as the side and lower air vents -- all of which get unique honeycomb design. Even the Audi logo is all black.

The sleek matrix LED headlamps look cool and suave as ever, while the wing mirrors now get a black coating as well. The extended wheel arches along with their swanky RS-spec 22-inch wheels and large brake calipers further the sporty appeal of the RS Q8. Of course, you do get that stylish sloping roof and even more black trim along the window line.

The rear of the Audi RS Q8 features large oval twin-pipes (so very RS), plus a heavily reworked bumper that houses an air diffuser and some honeycomb design as well. There are some fake vents behind the rear fenders, just beneath the gorgeous LED tail lamps. Then there’s a roof-mounted spoiler and a glossy black trim piece in-between the rear lights. 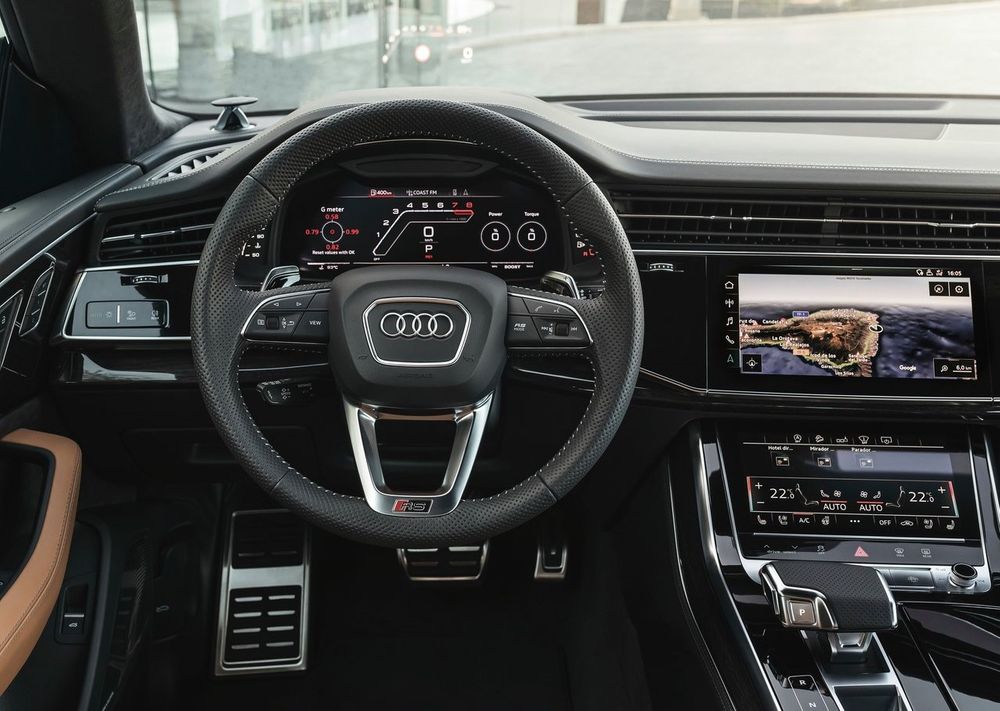 The 2020 Audi RS Q8 comes with a sporty, leather-wrapped steering wheel which also gets paddle shifters. Being an RS, this Q8 gets plenty of suede as well -- such as on the doors, door pillars, roof, and even on the front visors. Then there are the RS-spec leather seats which, up front, feature some aggressive side bolsters.

As for the rest of the interior, it is largely similar to that of a standard Q8 - meaning you get a fully-digital driver’s display, twin digital touchscreens, and shiny metal and piano black surfaces and trim. Just as you’d expect, build quality in here is fantastic! Meanwhile, the seats all around are great and the cabin doesn’t really feel cramped or uncomfortable. Of course, don’t expect it to be as relaxing and airy as the Q7’s living quarters.

Now, coming to (perhaps) the most important part here - that is the 2020 Audi RS Q8’s engine. Its powerplant is a 4.0-liter twin-turbo V8 that delivers a smooth but commanding 600 hp and 800 Nm of torque. All of this goes through an 8-speed automatic gearbox and propels the RS Q8 using a tweaked version of the marque’s Quattro AWD system. And thanks to all that oomph, the 2.3-ton Audi RS Q8 can sprint from 0-100 km/h in an incredible 3.8 seconds, and if you pay more dough, the top speed can be raised from 250 km/h to 305 km/h! 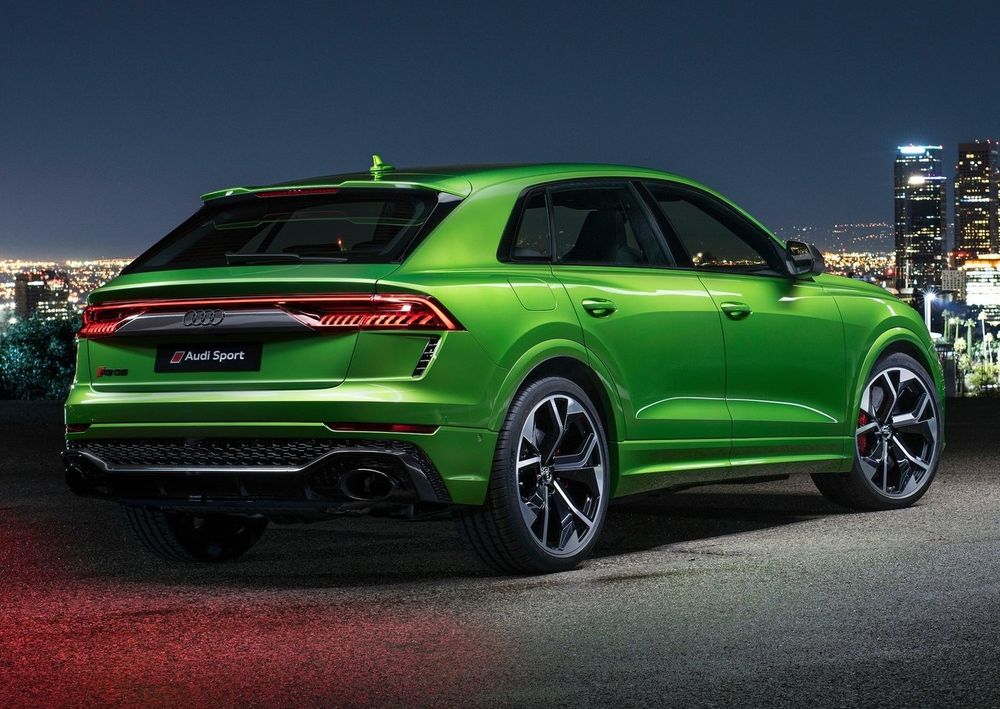 While the all-new Audi RS Q8 isn’t officially here in the UAE yet, that time isn’t too far away. If you want one of these, it’s not going to be cheap -- expect to pay at least around 600,000 dirhams or so (before options).