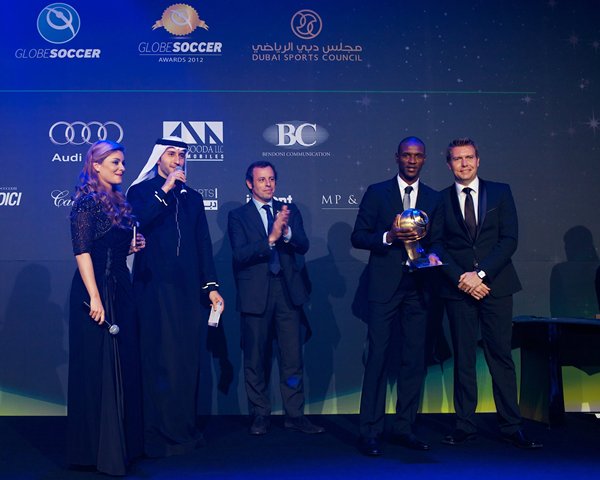 Presented by Al Nabooda Automobiles, the official dealer of Audi in Dubai and the Northern Emirates, the awards event took place at the Armani Hotel on 28 December as part of the prestigious annual meeting dedicated to leading transfer market operators.

Other winners on the night were Atletico Madrid for Globe Soccer Club of the Year, Diego Maradona for Player of the Century and Hassan Mohammed for UAE Goal Scorer of the Year.

Chayne Brand, Marketing Director of Audi Middle East said: “Football is one of the key sports in the UAE and the Middle East and we are very honored to host and support the Globe Soccer Awards in their 4th edition.  Around the world, Audi stands for sportiness and dynamism and it is a pleasure to help further the growth and intercontinental integration of football.”

Organised by BC Bendoni Communication in collaboration with the Dubai Sports Council, Globe Soccer has become one of football’s most exclusive events, creating a platform for discussions among key players and managers on the game’s key issues.

The event is dedicated to the football market operators who, together with the clubs, leagues, federations and football institutions, are able to extend their network of contacts and bring themselves up to date with the most important current issues.

Player of his Career: Eric Abidal

Player of the Year: Radamel Falcao

Club of the Year: Atletico Madrid

Coach of the Year: Josè Mourinho

Agent of the Year: Jorge Mendes

Player of the Century: Diego Maradona