An overview of the new 2020 Mitsubishi Outlander PHEV 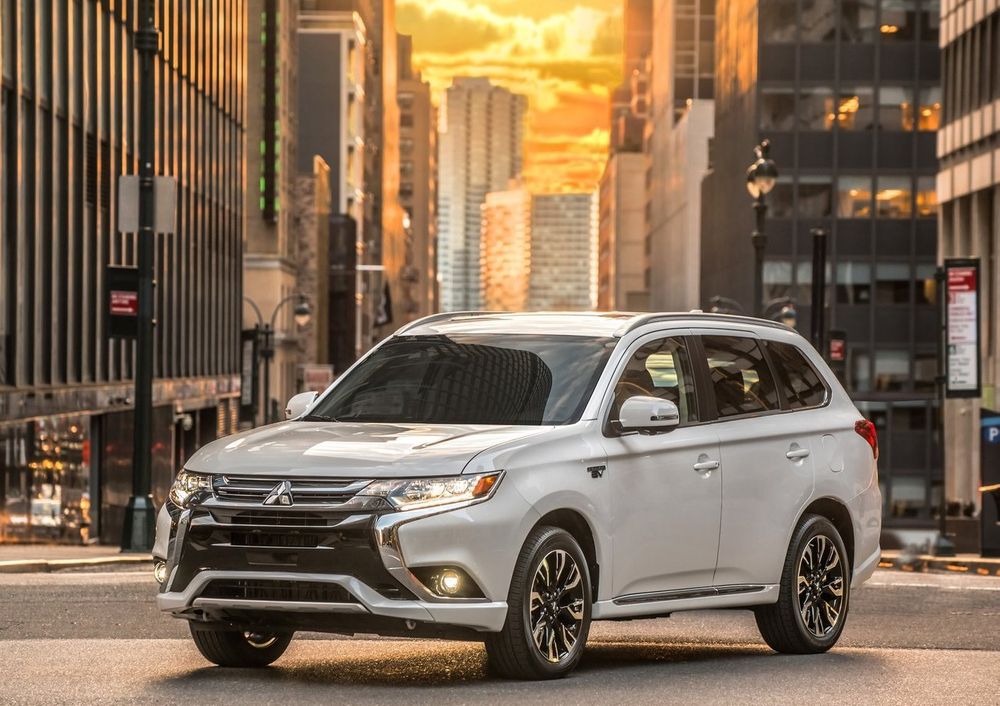 The Mitsubishi Outlander is one of the Japanese brand’s most popular models not just in the Middle East, but also in many other parts of the world. First unveiled back in the early 2000s, the first generation of this compact crossover SUV was built upon the same platform as that of the Lancer sedan. Two generations later, the outgoing iteration of the Outlander uses Mitsubishi’s GS architecture for its construction. While the third-generation car was introduced in 2012, it has gone through a couple of facelifts to keep it fresh and relevant, with the most recent update that has taken place in 2018.

The most noteworthy reveal, in respect to the third-gen model, was the launch of the all-new Outlander PHEV variant. For the latest 2020 model year, Mitsubishi has made some revisions to the PHEV variant of the Outlander, thereby assuring a more competitive and well-packaged product for customers in this segment. However, in the grand scheme of things, the 2020 Mitsubishi Outlander PHEV remains pretty similar to its 2018 (or even 2015) roots. Its primary rivals in the UAE include the Ford Escape and Nissan X-Trail, with other hybrids such as the Toyota Prius and Hyundai Ioniq also being considered.

When placed next to its regular variant, the Mitsubishi Outlander PHEV doesn’t boast any major changes to its overall form-factor or design. But the automaker has added some very minor bits to the car, which only become noticeable once they get close to it. To ensure that onlookers (and to remind the customer) know that this Outlander isn’t the regular one, Mitsubishi has stuck ‘PHEV’ badges above the front fenders and one even larger badge on the bottom right of the tailgate. Apart from that, the PHEV looks almost identical to the non-PHEV model.

Then again, Mitsubishi has done a good job in designing the latest avatar of the Outlander as it is, so the PHEV is still a pretty decent-looking crossover. This means you get shiny chrome on the front grille, bumper and fog lamp housing along with a thick chrome bar running between the tail lamps. Mitsubishi’s signature “Dynamic Shield” design is still prominent upfront, whilst the revised face also gets a new headlamp design and a heavily reworked bumper. In terms of its dimensions, the Outlander PHEV measures 4.695 meters in length, 1.800 meters in width and 1.710 meters in height. 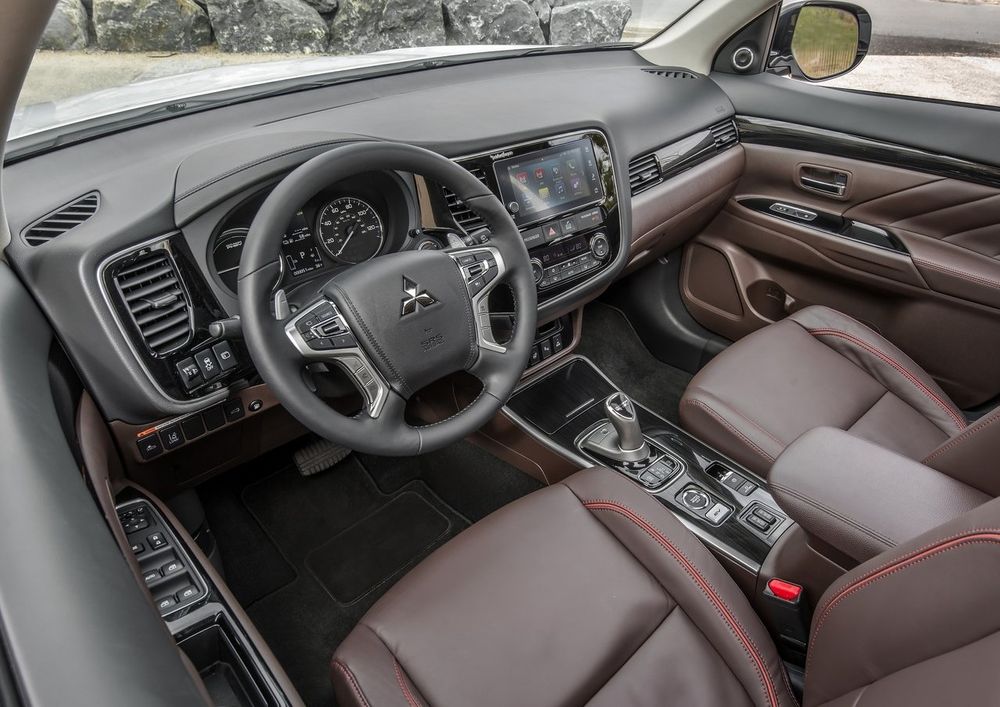 The interior of the new Mitsubishi Outlander PHEV is, once again, almost exactly similar to its regular internal-combustion sibling. Of course, there are telltale signs that give this one away such as the absence of a typical engine rev indicator, while the steering-mounted shift paddles now control the vehicle’s coasting behavior by altering the amount of energy that’s being recycled. Then there’s the fancy new gear selector which looks more like a joystick than a simple gear lever, thus adding some much-needed funk to this otherwise simplistic interior.

The seats of the Outlander PHEV provide ample amounts of room for even larger adults, whilst comfort levels are fairly good too. The strict five-seat configuration of the PHEV also means that there’s loads of space for all occupants, while the flat roof frees up enough headroom for even the taller ones in the family. As for rear cargo space, the Outlander PHEV offers up to 463 liters with the rear seats in place. Build quality and fit-finish is good, though there’s still some hard plastics in this cabin, though that’s not something unexpected.

Powering the 2020 Mitsubishi Outlander PHEV is a 2.4-liter naturally-aspirated four-popper that comes paired to a 13.8 kWh lithium-ion battery pack. Combined, the Outlander PHEV produces 236 hp and 300 Nm of torque. The PHEV has an all-electric range of around 54 kilometers, with twin AC motors (one aft and one forward) driving all four wheels. The Outlander PHEV can achieve an incredible 1.6 L/100 km (theoretically speaking) and if you give it the beans, it will hit 100 km/h in 10.5 seconds. 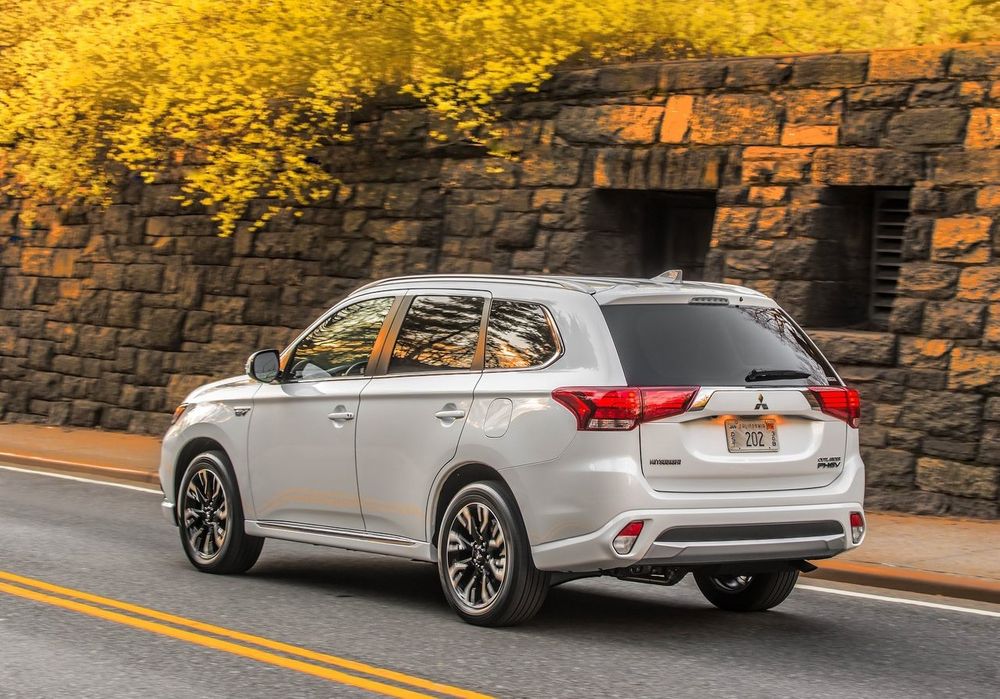 In the UAE, the 2020 Mitsubishi Outlander PHEV costs AED 140,000 and AED 153,000 for the Baseline and Topline trims, respectively. If all you need is a five-seater, practical, safe, and fuel-efficient family crossover, the Outlander PHEV is worth a look.