An overview of the UAE bound 2020 Porsche Taycan 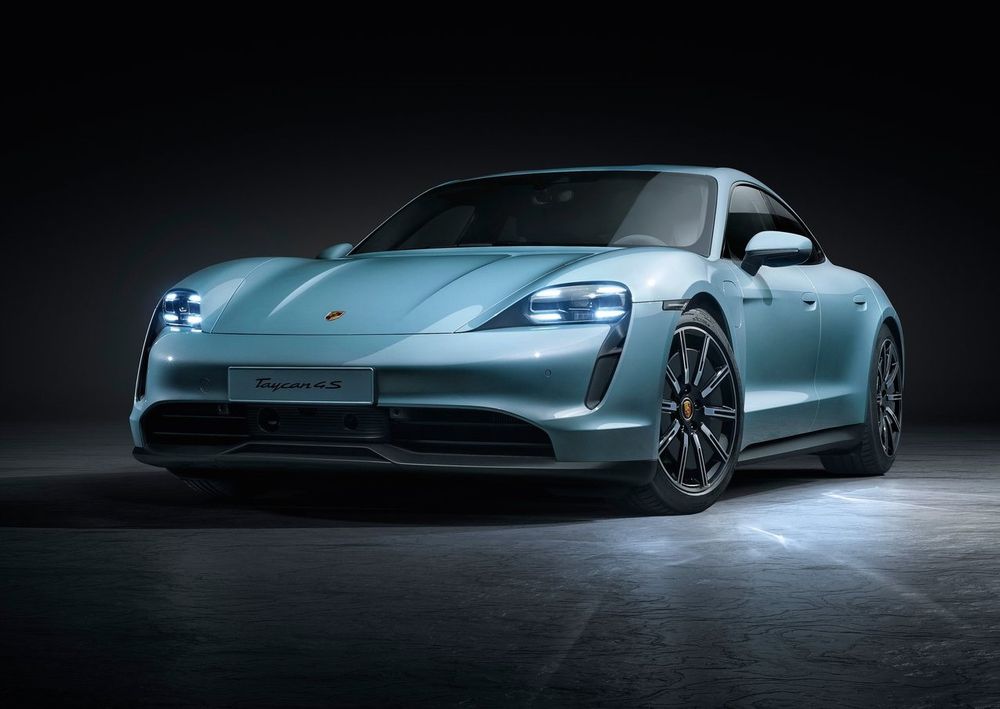 Porsche is one of the most affluent and well-known premium car companies in the world, and their line-up is quite comprehensive. While the German automaker is most famous for its iconic 911 range and the ultra-popular Cayenne SUV, the brand’s reach is undeniably vast. However, the one thing that this luxury auto major never had was a full-fledged, all-electric production car -- something that’s now been solved with the introduction of the all-new 2020 Porsche Taycan.

The Porsche Taycan made its debut back in 2015 as the Mission E concept car at that year’s Frankfurt Motor Show. It’s built on Porsche’s newly-designed J1 platform (which also underpins the latest Panamera), and represents the Stuttgart-based marque’s first foray into the world of fully-electric cars. According to Porsche, the Taycan will carve a path for future EV models. Since it will be going up against the already established Tesla Model S, the 2020 Porsche Taycan will certainly have to be on its A-game right from the get-go.

The design of the 2020 Porsche Taycan isn’t revolutionary by any measure -- Porsche usually sticks to an evolutionary yet modern approach to car design. The same is the case with the Taycan. It looks a lot like a stretched-out version of the new 911 but with four doors and a silhouette that’s quite distinctly Taycan (pun intended). Porsche’s effort into streamlining the shape of this four-door coupe has endowed it with an ultra-low drag coefficient plus a really sporty stance.

Like other Porsches, the front of the new Taycan features an all-LED arrangement for the headlamps with the brand’s signature four LED DRLs. The carved bumper houses some neatly-placed air intakes along with aerofoil sections to channel the air flow. The chiseled yet non-intrusive hood, raked windscreen and A-pillars, curved front fenders and the sleek wing mirrors are all there to achieve optimum aerodynamics and minimal drag.

The stylish side profile of the Porsche Taycan also incorporates air vents behind the front fenders, sculpted bodywork, side skirts and huge 21-inch alloy wheels. The curvy hips lead to the rear of the Taycan, where the wide and hunkered-down stance of this sporty four-door coupe really becomes apparent. The rear of Taycan also features Porsche’s fantastic all-width LED light bar along with an electronically-controlled spoiler and a comprehensive diffuser to further help with the air flow. 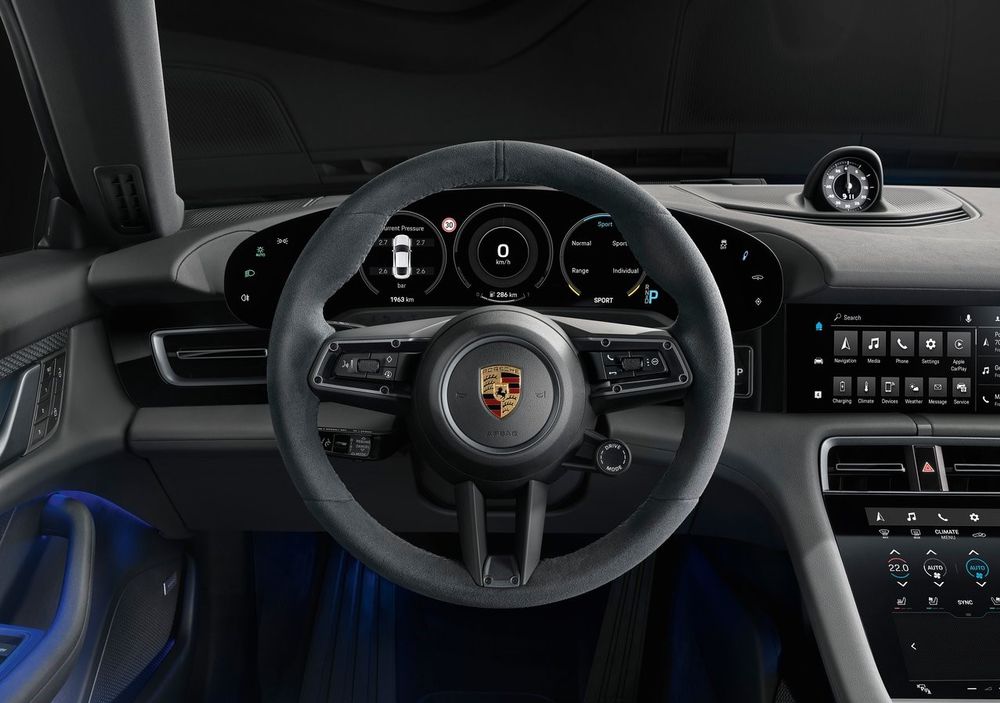 In typical Porsche fashion, the interior of the 2020 Taycan feels absolutely sublime -- it’s packed full of modern technology, supremely high-quality materials, fantastic build quality and a contemporary design language. Up front, there are a total of four digital screens - the instrument display, primary head unit, (optional) secondary head unit in front of the co-driver, and a vertically-arranged touch panel on the center stack. The extremely comfortable yet supportive seats of the Taycan look sporty, while the exquisite and posh cabin is trimmed in Alcantara, leather and wood.

The Porsche Taycan is a strict four-seater, though it does offer two luggage compartments for additional storage. The front trunk (or frunk) can hold 81 liters and the main rear boot can carry up to 366 liters. The Porsche Taycan comes with advanced features such as Porsche Active Suspension Management (PASM), Porsche Dynamic Chassis Control Sport (PDCC Sport), Porsche Torque Vectoring Plus (PTV Plus), Porsche 4D Chassis Control, radar-guided cruise control etc.

The 2020 Porsche Taycan (Turbo S) is equipped with the Porsche Performance Battery Plus package which delivers an overall capacity of 93.4 kWh. The Taycan Turbo S is rated at a maximum range of 450 kilometers, while its dual asynchronous electric motors are (effectively) controlled by two separate gearboxes that are located at the front & rear axles respectively.

The Taycan Turbo S generates 761 hp and a massive 1,050 Nm of torque! So despite its hefty 2.3-ton curb weight, this stylish four-door coupe, with its advanced all-wheel-drive system, can hit 100 km/h in just 2.8 seconds. Meanwhile, top speed for the Taycan Turbo S is an impressive 260 km/h (slightly faster than a Model S). 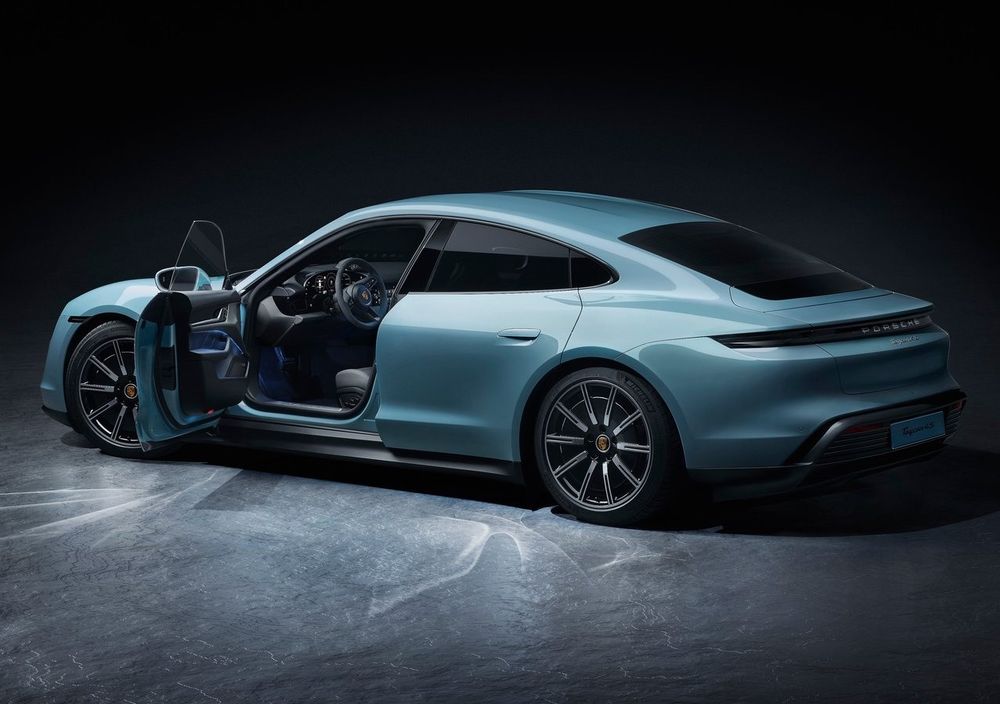 If all works according to plan, the all-new Porsche Taycan should arrive in the UAE sometime in the first half of 2020. With its electrifying performance, incredible driving dynamics and sophisticated design (among other tangibles), the Taycan is poised for the attack.