Ford Expedition 2018 launched in the UAE 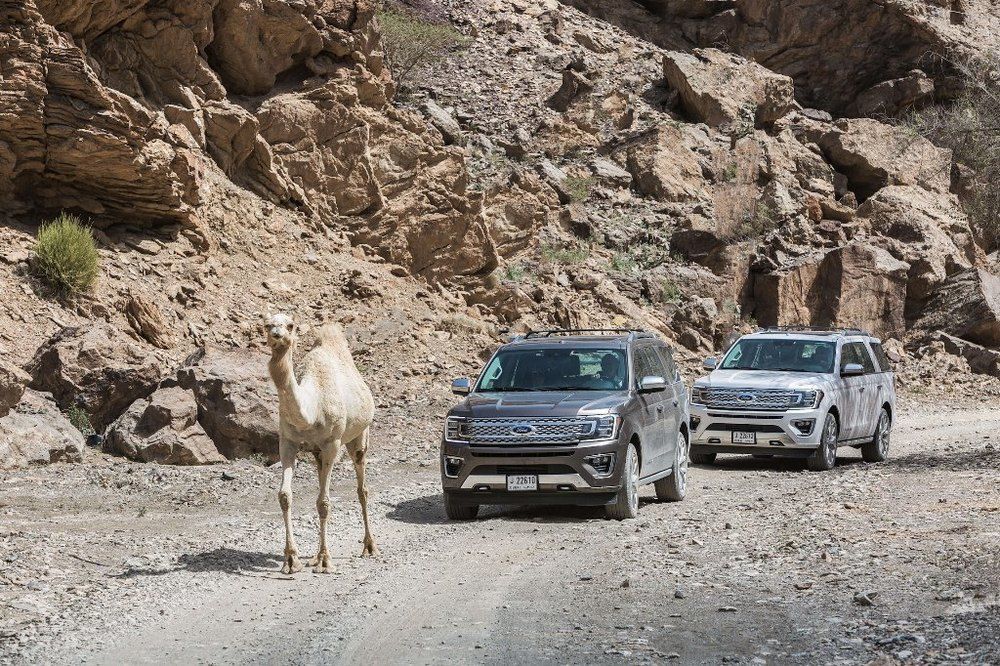 The Ford Expedition has been around since 1996 and has differentiated itself from the smaller Explorer by working on its key strength: spaciousness. Currently in its fourth-generation, the all-new Expedition goes up against the Chevrolet Tahoe, Nissan Patrol and Toyota Land Cruiser, and offers those looking for an uber-luxurious full-size family SUV plenty of bang for their buck.

Launched at the Desert Palm Resort & Hotel in Dubai, the American SUV aims to set new benchmarks in the segment it competes in by being the smartest, most capable, and most adaptable Expedition to date. A whopping 136 kilograms lighter than the model it replaces, the all-new Expedition holds on to everything that made its predecessor a top-pick while welcoming features such as active park assist, wireless charging, adaptive cruise control and blind spot monitoring.

Crystal Worthem, Marketing Director at Ford Middle East and Africa, said: “The all-new Expedition represents the very latest thinking in SUV design and capability, and has given our teams the ideal opportunity to incorporate the most up-to-date features for our owners to enjoy. We set the benchmark and established the SUV category nearly three decades ago with the Explorer and the full-size SUV segment with the Expedition in the 90s.”

On a route that spanned over 100 kilometers and saw us make our way from Dubai to Ras Al Khaimah through mountains, abandoned villages and parts of the desert, we were given ample opportunities to interact with the Expedition and test it over varying terrain. With three media colleagues along for the ride, drive time was divided with my role focused on the off-road bits, the rocky mountains and loose sand. 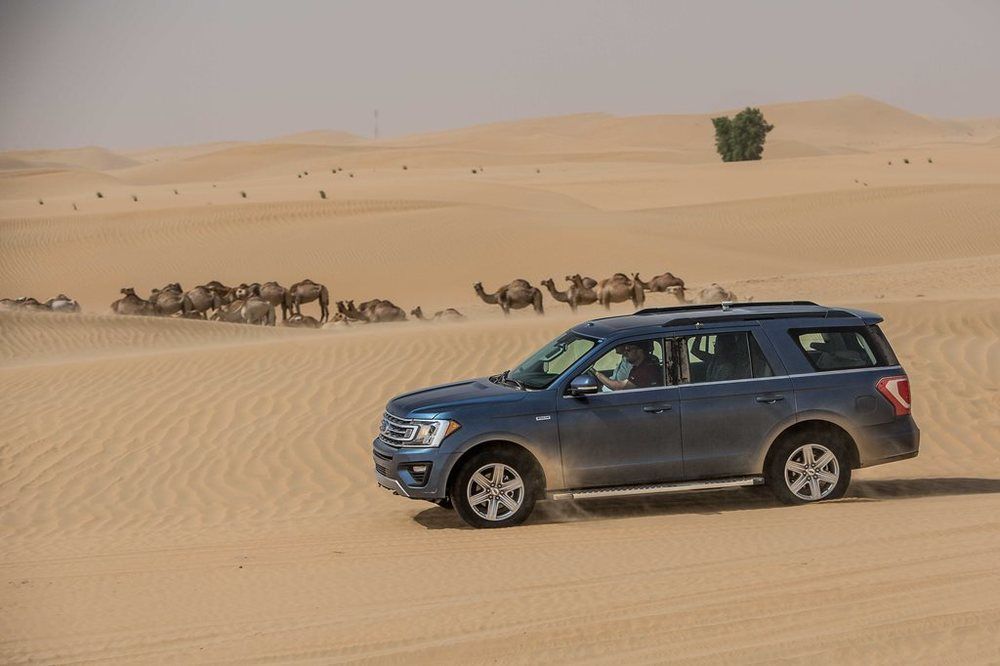 Parked in the second-row of the XLT trim (mid-option model) we set off from Dubai and I immediately found myself in unimaginable amounts of comfort with a sunroof overhead, sliding and reclining seats that offer best-in-class leg-and-hip-room, fifteen cupholders, individual A/C vents, dual charging ports, and the ability to control the media from the back.

Although the ride did seem incredibly stiff at first, with the Expedition bouncing over imperfections on the tarmac, a quick scroll of the customizable instrument cluster display revealed that it was due to the overinflated tires that read a scary 47 Psi and less to do with the suspension set-up itself. A few minutes in the back seat and it was evident why the Expedition is loved by large families across the globe. 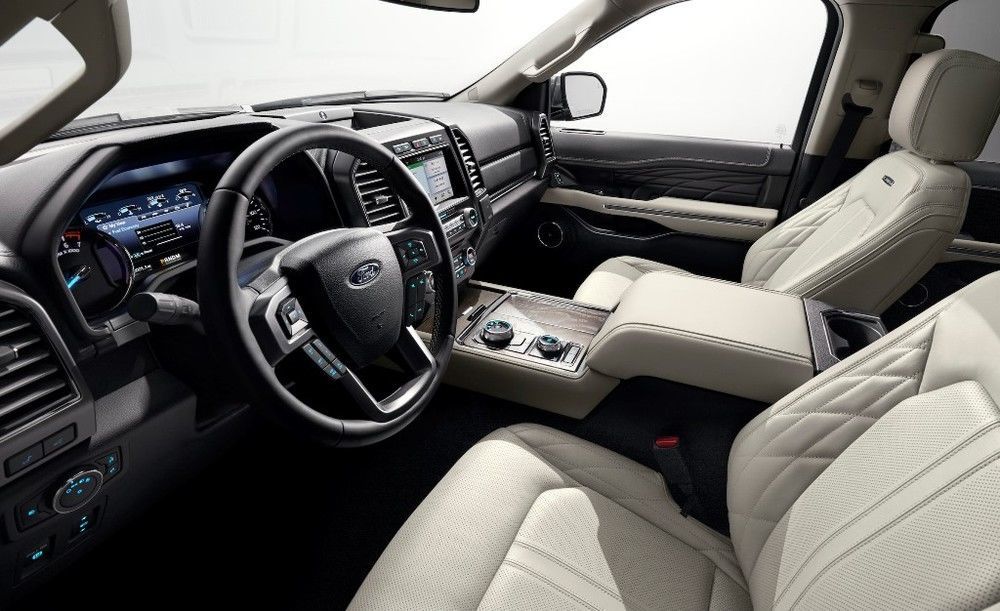 Our first pitstop and it was time for me to hop into the driver’s seat. A quick turn of the rotary drive mode selector and the Expedition was in sand mode with the traction control switched off, center differential locked, and power being sent to all four corners. Experiencing how easily the Expedition took on the desert sands was impressive, especially the poise with which it carried itself and how effortlessly it kicked its tail out at the push of the accelerator pedal.

Despite being down-tuned (in comparison to the 3.5-liter EcoBoost engine that powers the Platinum trim) the XLT with its 375 horsepower and 637 Nm of torque managed exceptionally well. In the mountains and with hill descent control engaged, the American SUV continued to do things one wouldn’t necessarily do in something as large as the Expedition. 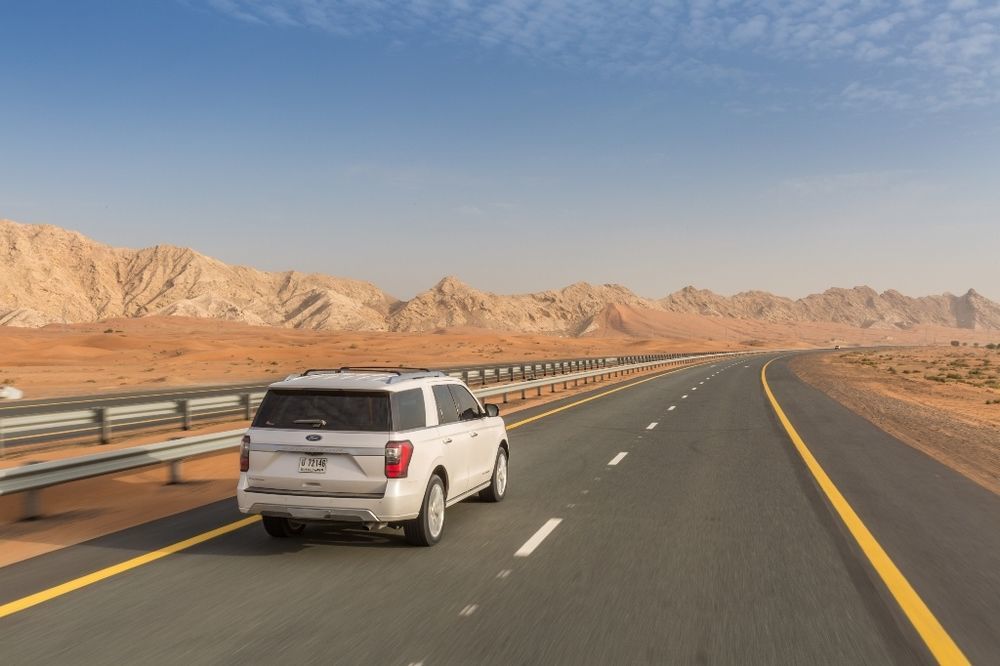 With the XLT proving it could handle the rough stuff with relative ease, it was time to jump into the fully-loaded Platinum model and make our way to the Waldorf Astoria in Ras Al Khaimah, albeit on tarmac this time around. A simple cruise made even easier with the plenty of driver assistance aids that include but are not limited to adaptive cruise control, adaptive steering, lane keeping assist, and blind spot monitoring.

Differentiating itself from the other variants in the line-up, the Platinum packs 25 horsepower and 13 Nm of torque more, pushing total outputs to a class-leading 400 horsepower and 650 Nm of torque. The most noticeable difference, however, is with the Continuously Controlled Damping (CCD) suspension set-up that works in the same sort of fashion as Cadillac’s Magnetic Ride Control but is not to be confused with an air suspension set-up.

Buttery smooth on the road and with the 10-speed automatic shuffling through gears seamlessly, the 2018 Ford Expedition Platinum is hard to fault, especially when it’s packed to the brim with features, offers more space than any of its rivals, and costs just AED 293,000. Sure, that’s no small amount but in comparison to its more popular Japanese rivals, it’s a bargain by all means.

Volkswagen prepares to unveil all new Touareg in the GCC