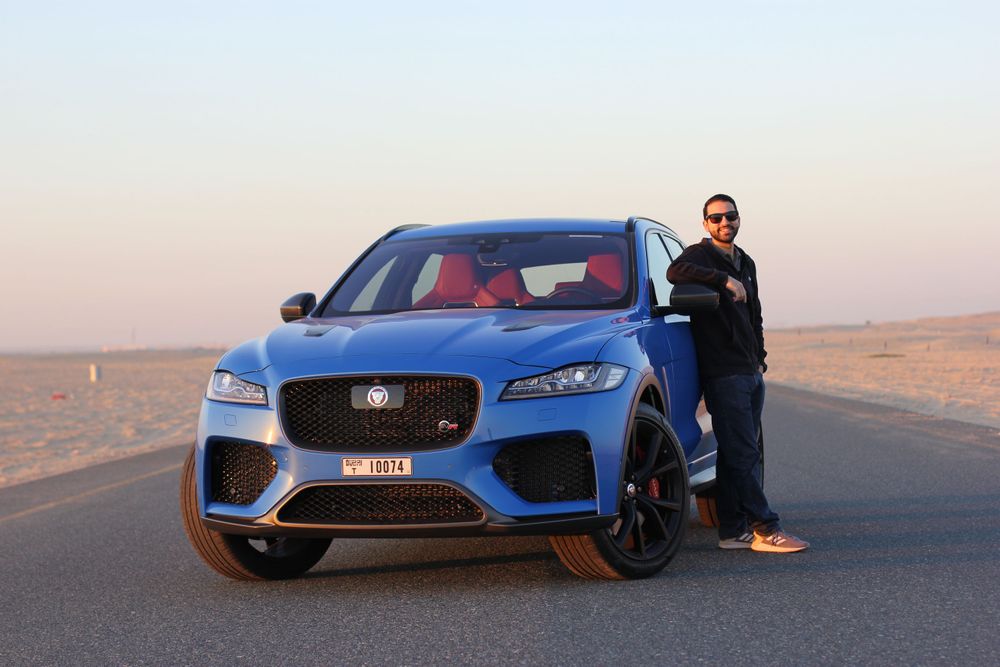 This is the Jaguar F-PACE SVR, the fastest, most powerful, and most expensive SUV ever made by the brand. By the end of this review, you’re going to find out if it is worth 465,000 Dirhams and if it is better than other performance SUVs such as the Alfa Romeo Stelvio Quadrifoglio and the Porsche Macan Turbo. 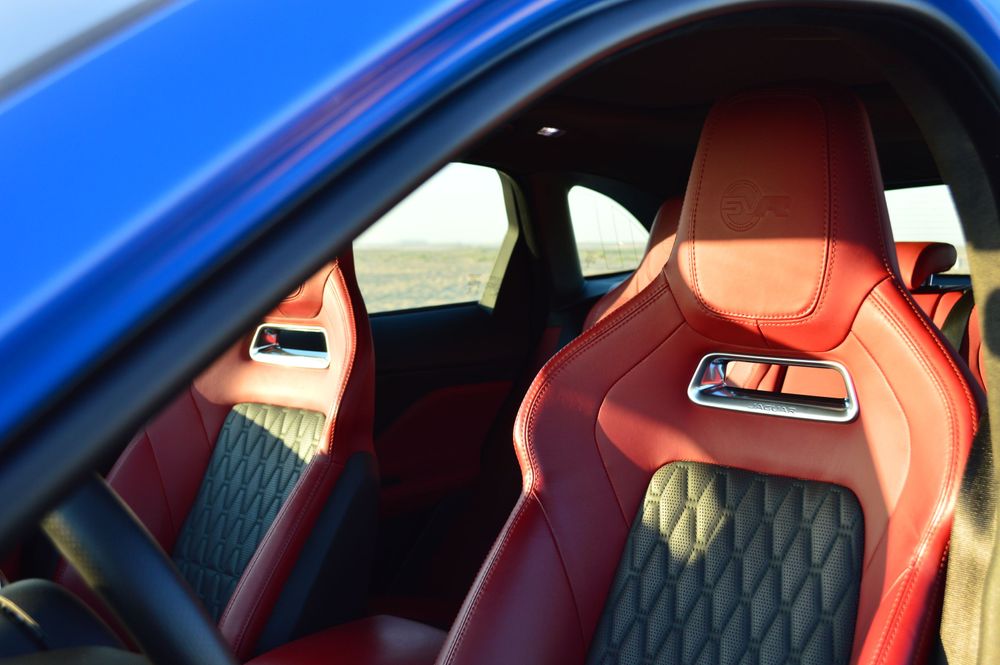 Within Jaguar Land Rover, a company that employs over 40,000 people across the globe sits a very unique department that goes by the name of Special Vehicle Operations (SVO). The men and women that make up this department are tasked with making the brand’s cars fast and fun to drive, and those two things, the F-PACE SVR certainly is.

Packing 542 horsepower and 680 Nm of torque from a supercharged 5.0-liter V8, the F-PACE SVR is no normal SUV. It has things like launch control, which when activated, will allow you to accelerate from 0-100km/h in just 4.3-seconds and if you keep your right foot down, it will accelerate all the way to 283 km/h, but power is only one side of the equation. 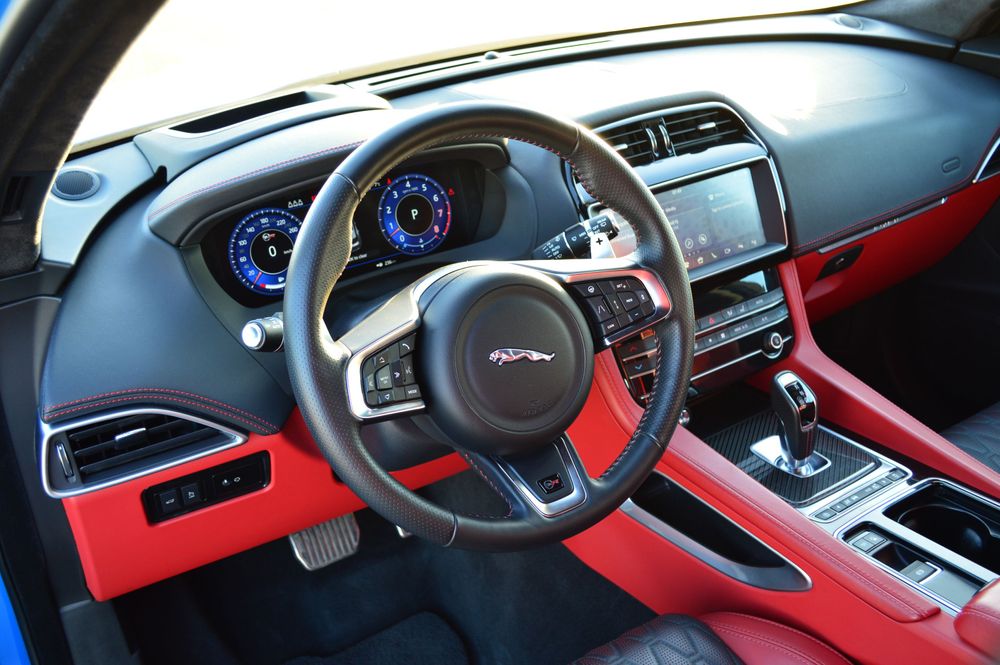 What the SVO team has done is put stiffer springs and suspension bushes for better handling. They have added a high-performance braking system. They have tuned the 8-speed automatic transmission to shift gears in just 200 milliseconds. And then they’ve added a sports exhaust system that is 6 kilograms lighter and sounds absolutely mental.

In essence, the F-PACE SVR is an SUV that Jaguar wants you to drive fast; very, very fast, that’s why it has things like Torque Vectoring to reduce understeer and let you take corners at high speeds. It has All Wheel Drive for better grip. It has a Dynamic drive mode that sharpens the throttle response and changes the exhaust mapping, and it also has a speed limiter button hidden deep inside near the driver’s knee but that’s just because Jaguar doesn’t really want you to use it. 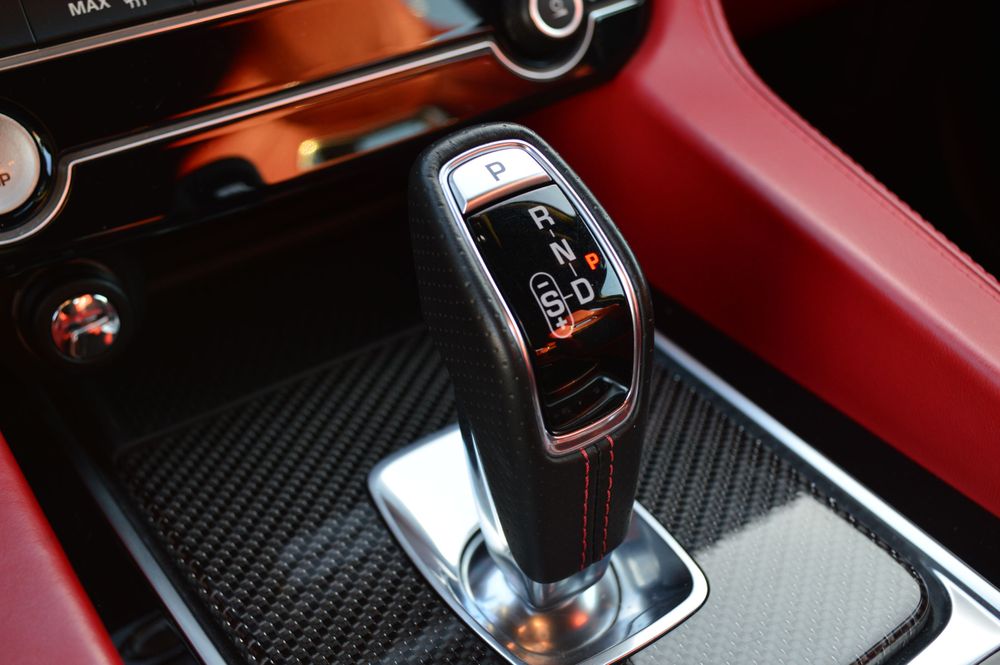 Very simply said, this is an enthusiast’s SUV. Most people will probably find it too fast, too loud, and too harsh, but if you’re a petrol head who wants to drive a sports car but needs to drive an SUV, then the F-PACE SVR is definitely one you would want to consider. 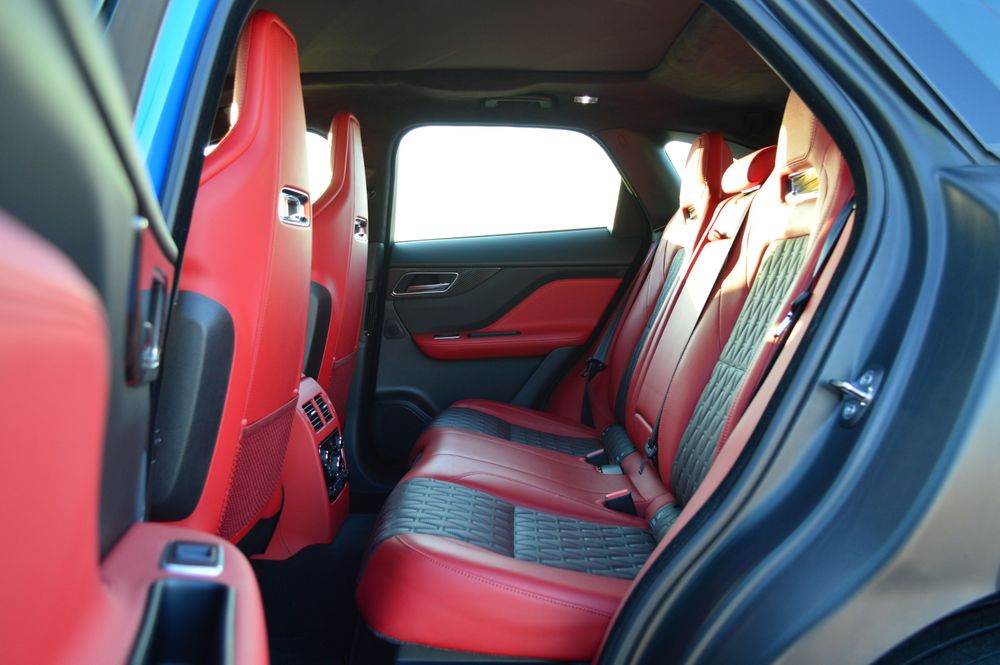 When it comes to the interior, the design is quite minimal but at no point in time does it let you forget that you are seated in a high-performance SUV. There are sports seats that are covered in a combination of red and black leather, aluminum paddle shifters, and meshed aluminum veneer all around the cabin.

In the back, the designers have carried over the same sports seats from the front and increased the comfort with the option of heating and cooling. There is a 4-zone climate control system, two 12V outlets for charging devices, and a couple of cupholders too. What is truly remarkable, however, is just how much space the engineers have managed to carve out as there is far more headroom and legroom than one would expect. 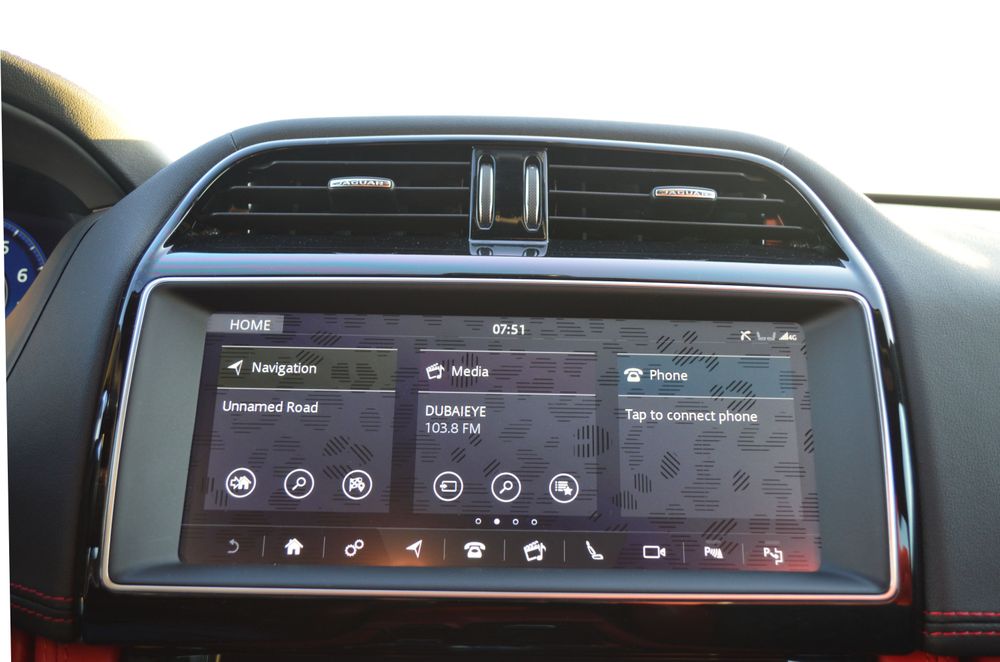 Generously equipped, the F-PACE SVR has everything from Heads up Display to Blind Spot Monitoring, and Adaptive Cruise Control to Lane Keeping Assist. It’s also got a 10-inch infotainment screen, a 12.3-inch digital instrument cluster, and a sliding panoramic roof. And oh yeah there’s also a 17-speaker Meridian audio system that I nearly forgot to mention because let’s be honest, who would want to listen to music when the exhaust system provides more aural satisfaction than any song ever could? 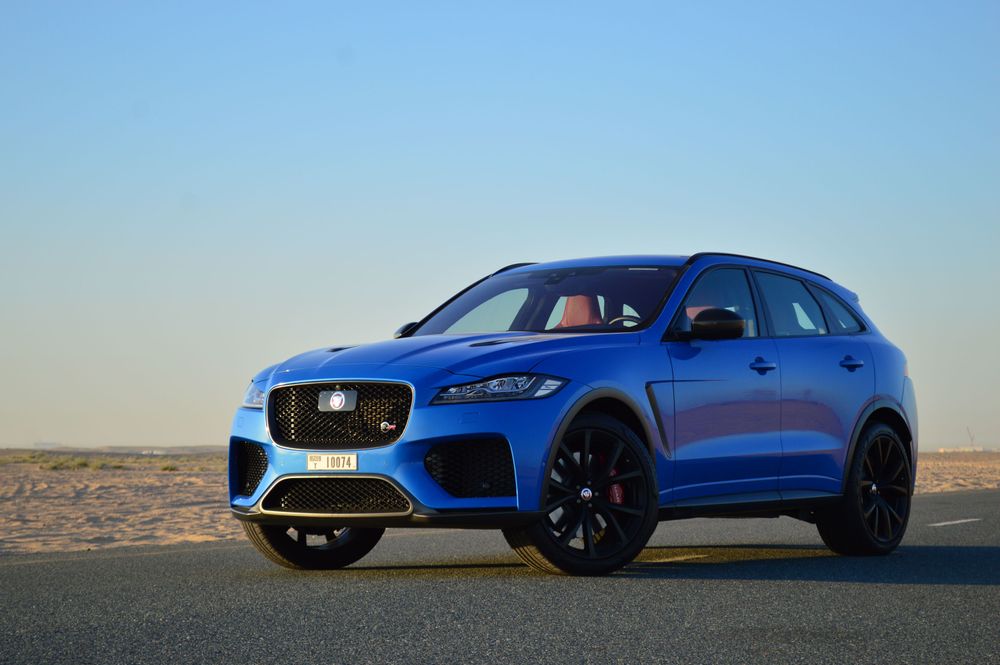 In terms of design, the F-PACE SVR is a true head turner and I agree that might have a lot to do with the amazing Ultra Blue color it is in, but why would anyone want to have it in a boring black, white, or silver when you can have it in orange, yellow, or blue? It also looks extremely muscular with vents on the hood, vents on the fenders, and a big diffuser, and what’s worth noting is that these aren’t just for show.

The bodywork has been carefully sculpted to push air over, under, and around the car, reducing lift and increasing traction on the tires. The vents help in cooling down the engine and brakes, but they also do the very important job of increasing downforce for better performance and handling. 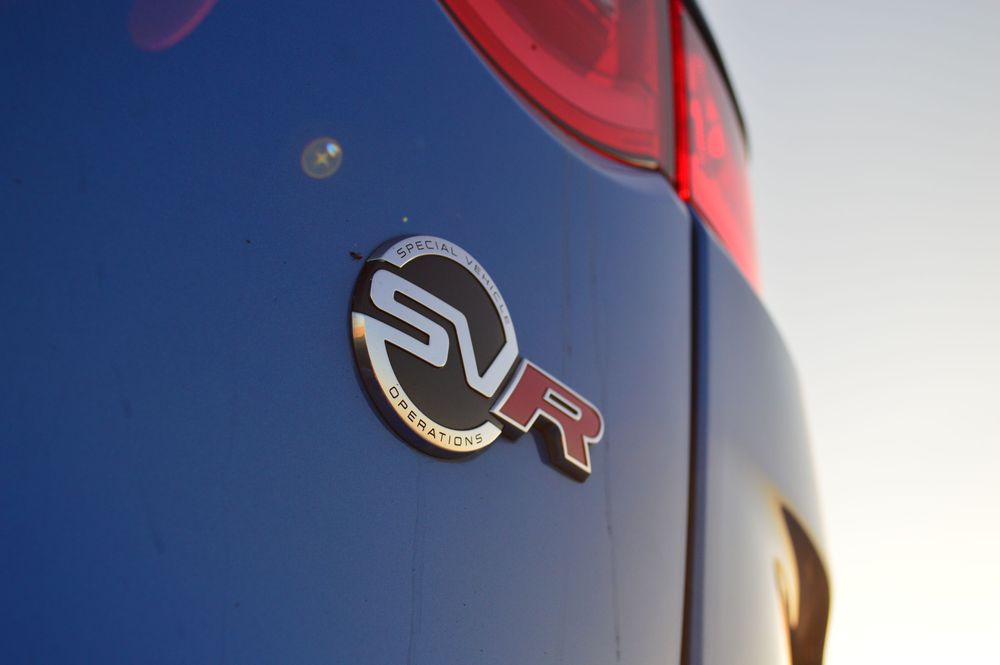 At the back, the F-PACE SVR looks broad and well planted and that’s because it has a staggered tire set-up, meaning the tires in the back are slightly wider than those in the front. Speaking of the tires, they are wrapped around 22-inch alloy wheels that flaunt neat little SVR logos on them, and for those of you wondering about practicality, boot space measures in at 650 liters which is a lot more than what the competition has to offer. 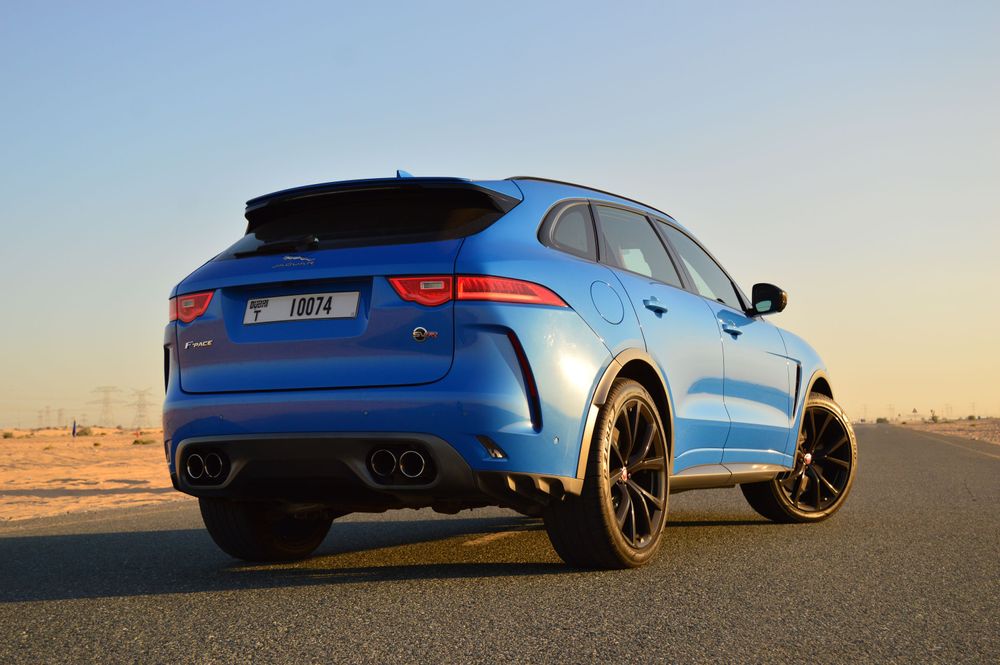 At 465,000 Dirhams, the Jaguar F-PACE SVR is an SUV with the DNA of a sports car. It is an SUV that has character and it is an SUV that is built with passion – something that cannot be said about many other SUVs in the market today. Sadly, it isn’t faster than its rivals around a racetrack but you know what? It’s probably the only one that will leave you grinning from ear to ear each time you drive it, and for that, 465,000 Dirhams seems like a justifiable price to pay. When it comes to purchasing a new car or a used car, save time and money by getting quotes from the highest-rated insurance provider in the UAE, InsuranceMarket.ae™.