Lotus is one of those marques that doesn’t believe in making a sedate family car. Since its inception, this relatively-small British automaker has been producing some of the most exciting sports cars on the planet. Of course, it had its hurdles (“read: financial trouble”), owing to which the company was in the doldrums for several years. However, Lotus has since moved past all that fog that clouded its forward momentum. Today, the company is best-known for its lightweight sports cars that beckon one to take them to a racetrack.

In the UAE, Lotus currently has three models on sale: Exige, Evora, and the insanely expensive but all-electric Evija supercar. However, sometime next year, the UAE will be welcoming the all-new Lotus Emira. Supposedly, this will be the last Lotus to be powered solely by an internal combustion engine. Also, it’s highly likely that the Emira will come in as a replacement for the outgoing Exige and Evora. 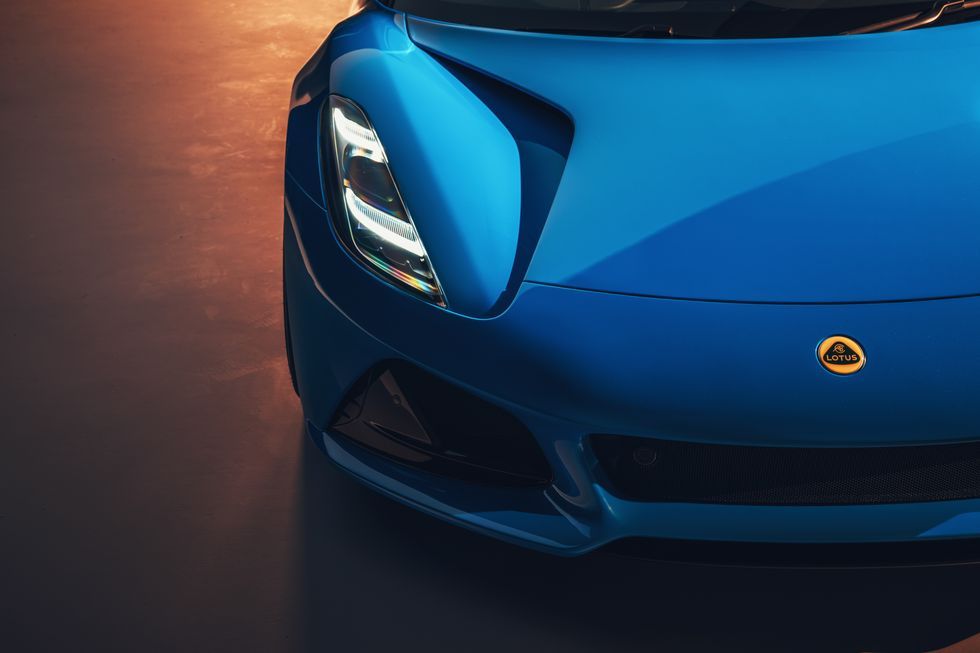 To put it simply, the Emira looks like it has been through multiple wind tunnel tests and CAD programs. The design of the Emira not only makes you want to look at it several times, but it also seems to be befriending the air molecules as they pass through the length and breadth of the car. According to Lotus, clever engineering of the Emira has made the need for active aero completely redundant. Obviously, since most of us aren’t aerodynamicists, we will just go with that notion. On a serious note, however, since active aero costs more and also weighs more, their lack will come as a boon for the lightweight Emira.

Weighing in at just around 1,400 kg, the Lotus Emira is exceptionally light for a modern-day sports car. Furthermore, it’s not like Lotus has shaved off the Emira’s personality along with its weight. This is, unequivocally, one of the most eye-catching sports cars in the world. The front-end of the Emira looks mighty aggressive without being unnecessarily pretentious. The sculpted bodywork is there for a reason, not just to look cool, which it does anyway as a byproduct. You can feast your eyes upon the sophisticated front LED lights, massive 20-inch wheels wrapped with Michelin Pilot Sport Cup 2 tires, and the two-tone paint job that make the Emira’s silhouette quite fetching.

Then there’s the Emira’s neatly-tucked side intakes, flared rear haunches, slender LED taillights, an expansive ducktail spoiler, and an intricate rear diffuser. The latter also supports twin exhausts and works in tandem with the bumper-integrated air vents for optimal airflow. No wonder the Lotus Emira stretches over 4.4 meters in length and nearly 1.9 meters in width! 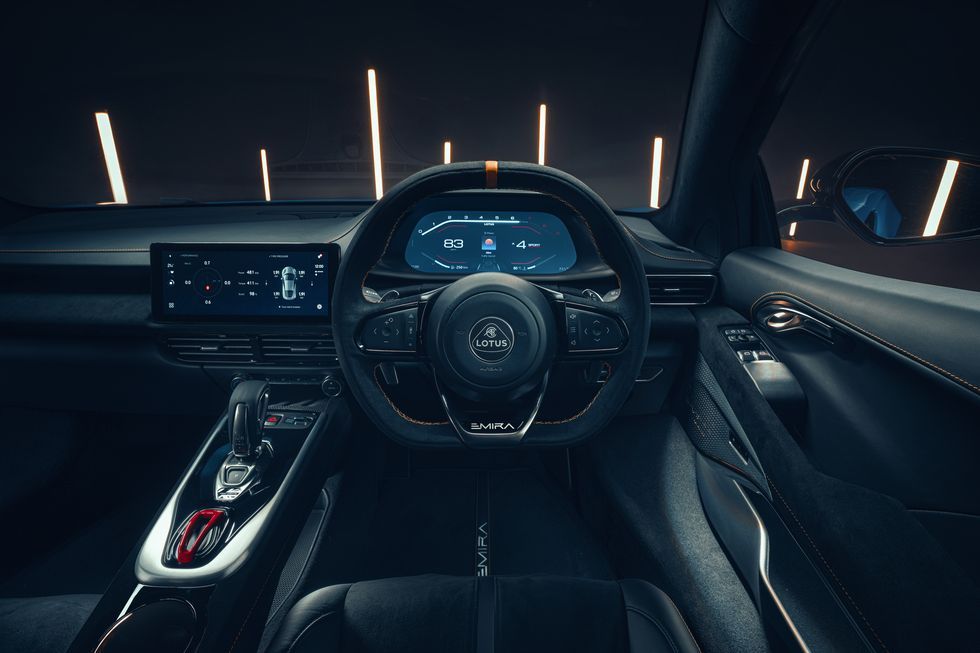 Does the inside keep up with the outside?

The interior of the Lotus Emira is what you’d call as sorted and sporty. For starters, there’s been a generous usage of suede and stitched leather in this cabin. It’s mostly a dark-cockpit theme that’s intermittently broken up with clever use of contrast stitching, metal accents, piano black trim, and LED ambient lighting. When you take into account the raised center console, body-hugging sports seats, twin digital displays, the Emira-branded sports steering wheel with paddle shifters, and the bright red flip-up-style starter button activation, this interior will soon grab your fancy.

Unlike Lotus cars of yore, the actual quality of the materials used and their general fit-and-finish are up there with the big boys. Moreover, it’s not like the Lotus Emira lacks some up-to-date technology and gadgets either. It gets features such as keyless entry, adaptive headlights, rain-sensing wipers, automatic climate control, a 10.25-inch touch-infotainment system with Android Auto & Apple CarPlay, a 12.3-inch digital driver’s display, and a 10-channel premium sound system from KEF.

And it’s not like the Lotus Emira is barebones when it comes to its safety features. Some of the tech that’s in here include adaptive cruise control, driver fatigue alert, an anti-collision system, lane departure warning with lane change assist, rear cross traffic alert, plus a healthy number of cushy airbags. 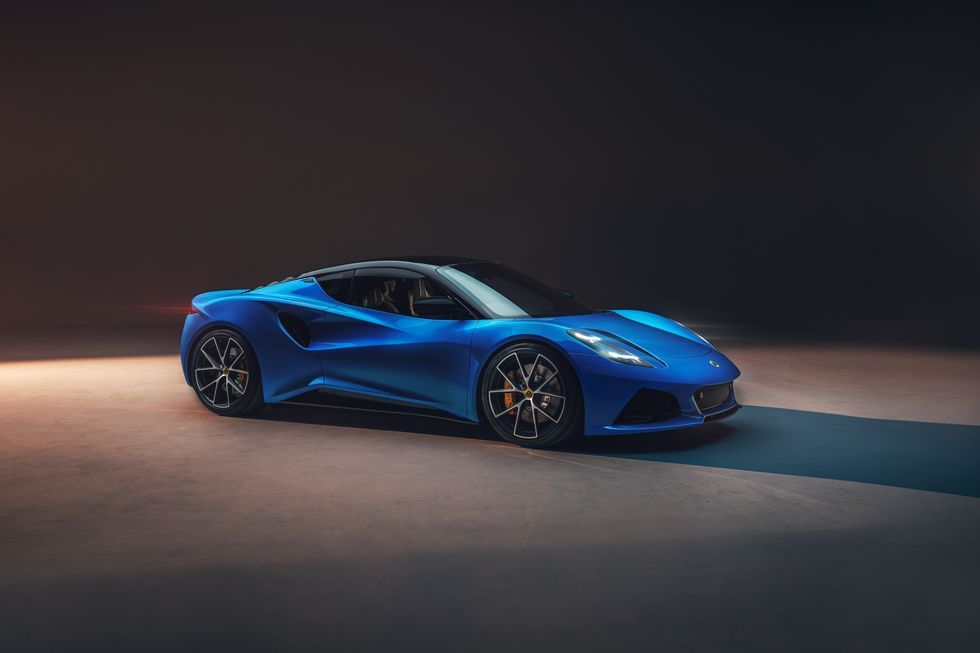 The Lotus Emira can be had with either an AMG-sourced 2.0-liter turbo four-popper or a Toyota-sourced 3.5-liter V6. The former puts out 360hp, while the supercharged V6 makes 400hp and 430Nm of torque. As for the transmission, there’s going to be a manual, a torque-converter automatic, and a snappy dual-clutch automatic. According to Lotus, the Emira is capable of rocketing from naught to 100 kmph in less than 4.5 seconds. Meanwhile, this mid-engine sports car’s top whack is a claimed 290 kmph. 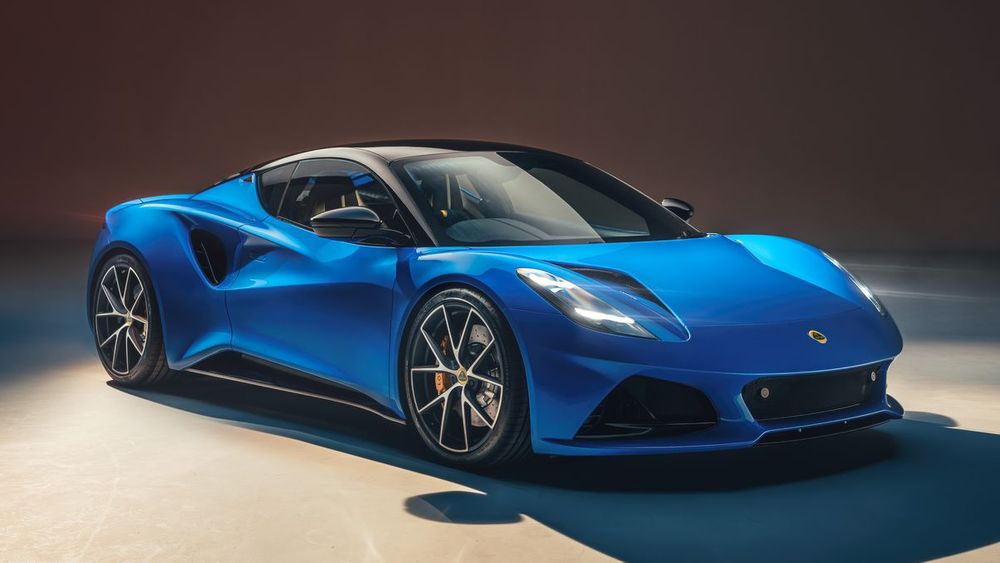 The Lotus Emira is set to reach dealerships sometime in 2022 with an estimated starting price of 72,000 euros or approximately 310,000 dirhams. Of course, by the time the Emira reaches our shores, it will likely cost a lot more than that, as is always the case.