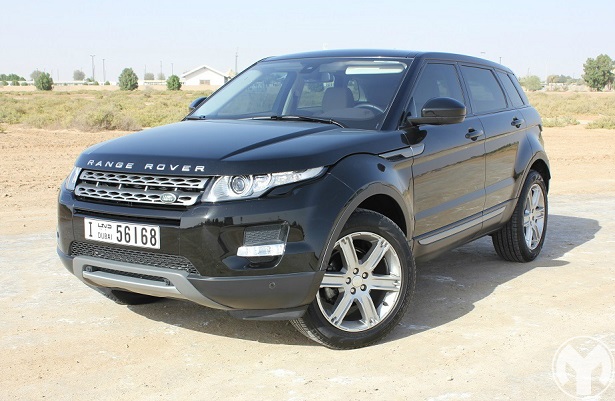 Released in 2011 to a unanimous ‘wow’ feedback, the Range Rover Evoque has been the choice of premium compact SUV buyers – especially women – for quite a while. So, it was time for me to actually look at it in a more detailed manner to understand what the fuss is about. Here’s the prices and specs of Evoque. 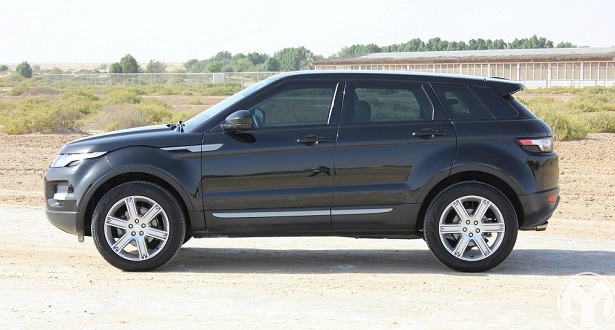 When the Evoque was released it was a game changer in terms of looks. Never before, a compact SUV was looked as a premium motor vehicle with modern chic appeal. But, that was then; 4 years down the line, there are many players in the style department and the frontrunner is undoubtedly the Porsche Macan (Prices and specs of Macan). That car looks perfect for the market segment and thus it is time for JLR to revamp the Evoque as it looks aged and lagging behind the prettier competitors. I have done a road test for the Porsche Macan Turbo myself, you can have a  look at it over here. 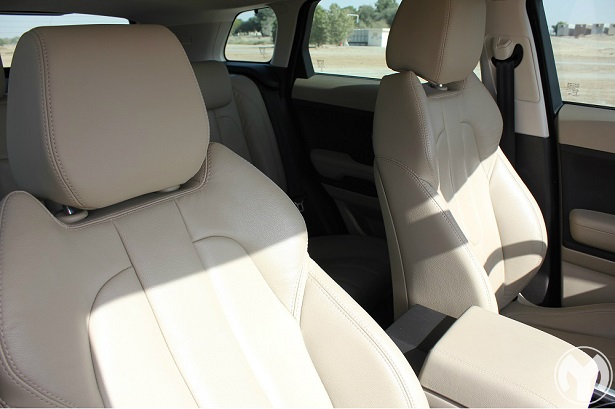 JLR is a premium brand and even their smallest offering will have the best finishing in the segment – though the materials used still don’t match the finesse of the one used in full-size SUVs. The compartment is a nice place to be in with a mix of leather and hard plastics smoothly integrated to give a relaxing feel while driving. The intended customer wants luxury at a budget and that is exactly what they are getting. So, all is good in this department. 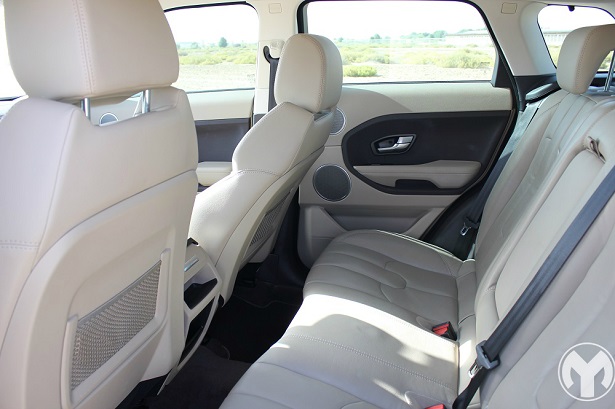 The Evoque provides a nice upright seating position with a clear view of the road from all angles. Add to that sensors and rear camera and you get good all-round visibility. As for the space, it comfortably seats 5 adults. However, the boot space does appear to be smaller than expected and JLR should work on increasing that in the next generation. 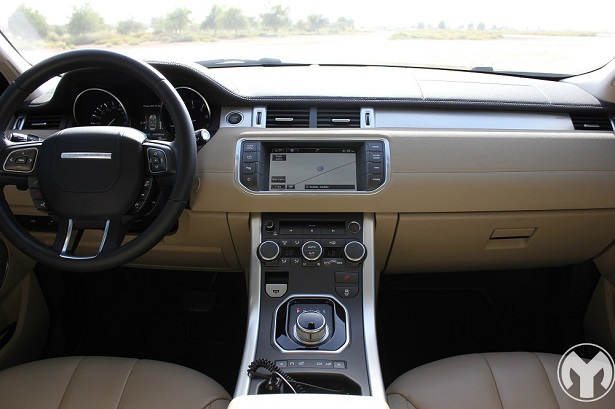 The new Evoque comes with all the standard JLR features like Bluetooth, AUX, USB, Touchscreen, Navigation, CD/DVD/MP3 etc. There is no feature missing in this car that I wished was present but wasn’t. The touchscreen interface needs to be improved as it looks highly outdated. Other than that, the addition of terrain response control makes it a darling offroad. Yes, it is a highly capable offroader and you won’t be disappointed taking it to the dunes. The short wheelbase helps its case a lot. 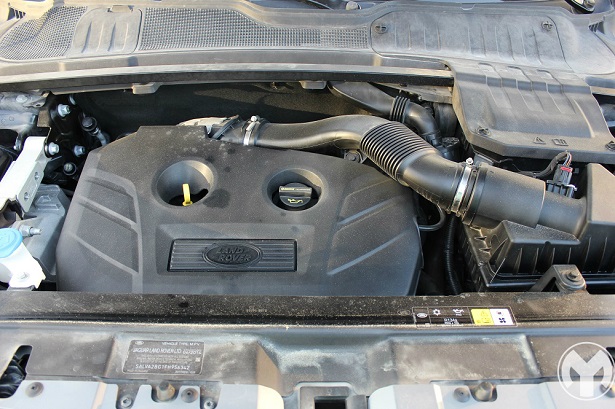 The Evoque is powered by a 2.0 liter turbocharged 4 cylinder engine producing 240 BHP.  That’s enough to propel it from 0-100 in 7.6s. However, during the test run, I managed to achieve 7.8s and not less – which is close enough.  It is a small punchy engine which cries at high revs and feels held back at times due to laggy transmission. This results in a decent economy rate of 12.8 l/100 km. In my opinion, there should be a 3.0 liter V6 supercharged option available as well because paying AED 200K+ for a 2.0 liter engine doesn’t feel practical. Also, the added weight of an SUV will be better handled by a bigger engine. Transmission on the other hand is smooth as silk and no point switching to sports mode as it doesn't make much of a difference. 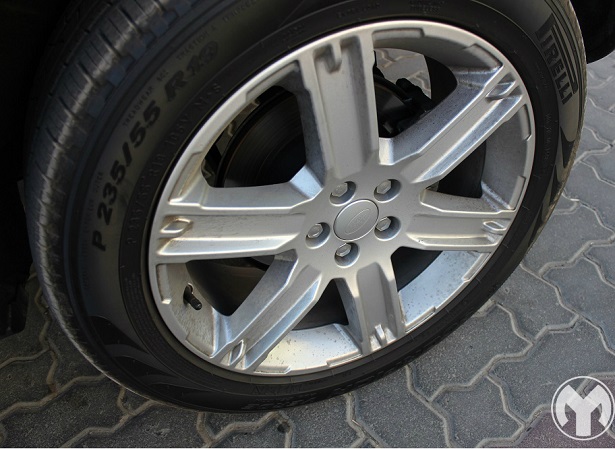 The Evoque is not meant to be a sporty compact SUV like the Macan and hence the driving characteristics are not same as well. The baby Range Rover handles like any SUV – with ample body roll. However, where other ‘regular’ SUVs are out there to kill you in corners, this little gem grips onto the road with tires screeching and all you need to do press the accel and it zips out of the corner thus regaining back its composure. So, for that I will give JLR good marks. Why good and not excellent? That’s because its biggest competitor in this department is the Macan which drives like a proper Porsche. However, the Macan is not gliding on straight roads in comfort mode whereas the Evoque is. At 80 km/h on a stretch, the car feels like a breeze. There are no damper settings to play around with here which means switching to ‘sports’ mode just makes the throttle more responsive and that’s it. Brakes on the other hand are trustworthy and invite you to brake later than expected – but it’s a JLR so you would expect that. 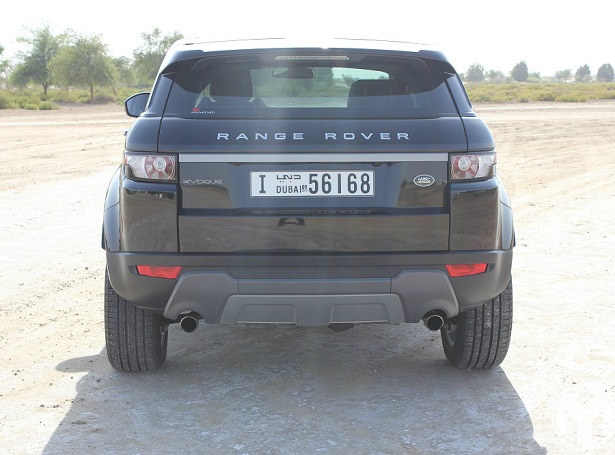 The Range Rover Evoque is a good choice for a small SUV that has good offroad capability and decent on road. It fills the criteria of having a small engine, premium finishing and offroad competence. No other brand offers such a package and that is its USP. The Macan offers excellent on road but less than average offroad ability. So, it is in the end up to the consumer’s wish. However, if they include a V6 option with damper settings then it has the potential to beat the Macan on road as well.