Meet our off-road expert, Kapil Sachdeva. At the age of 4 years he drove his 1st vehicle off the road. It was a Tractor, and has been driving as much off-road as on-road ever since.

Having been banned from motorcycling, by his family, in 1991 after a near fatal hi-speed crash, he started racing go-karts in 1993 in India, Dubai and Europe. He has been Rallying in India from 2001 to 2006 including the “Rally Desert Storm” and “Raid-de-Himalayas”, winning several awards and ranks in the group N category (non-modified cars). He has been bashing dunes, wadding muddy rivers and rock crawling in India and in the UAE since 1998 and has an in-depth knowledge and understanding of on-road and off-road vehicles and techniques. 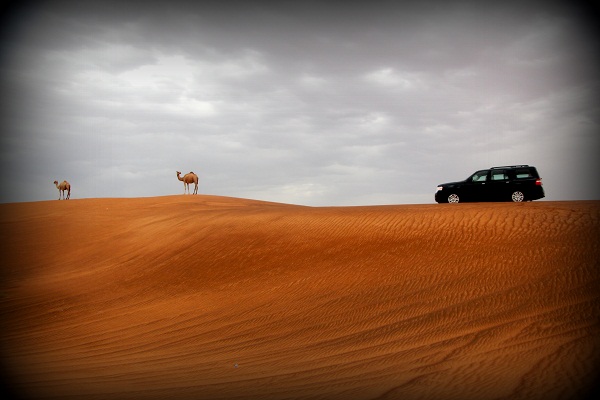 When one thinks off-roading here in the UAE with a few passengers, what comes to mind are some full-size SUVs which are popularized by the Desert Safari companies and off road-enthusiasts. One hardly ever thinks about the Ford Expedition!

We would call Expedition the ‘Underdog’ of the full size SUV segment here in the Middle East, especially in the off-roading arena. The big 5.4L V8 delivers 310 HP and 495 Nm of torque with about 85% of the torque being available at 1500 RPMs that enables it to get up in speed quite effectively.

We were able to do a 0-100 kmph sprint in less than 9 seconds on various attempts in rear-wheel drive mode and it has an electronic cut-off at 178 kmph on the dial. Here is the sprint test:

We were able to get an overall mileage of 17-18L/100 km. It has four selectable modes for driving; 2 wheel (rear-wheel), 4A (4 wheel –Auto), 4H (all time 4x4) and 4L (all time 4x4 LOW range). Each mode can be selected via a rotary control dial on the dash. The first three of these can be changed while driving upto speeds of 100kmph. To get in to 4L one needs to stop and change.

On the road, the Expedition behaves quite nicely with very precise steering, very minimum body roll and an even less "Pitching". Pitching is the up-down motion front to back like when the nose of a vehicle dives when the brakes are applied. For its size the Expedition is quite nimble to drive and one does not feel its size or weight. It remains almost, if not completely, flat during braking. Although the brake pedal feels a little spongy, the braking itself is impressive for such a big vehicle but the ABS comes to work even on dry roads quite soon. This might be due to the fact that Ford went down on the tire width from 275 to 255 some time in the past few years. This lesser width of tires also make them squeal a bit on fast turns, however the Expedition stops in about 4 seconds from 120 to 0 kmph!! Check out our braking test video here:

We took the Expedition to the big dunes in Dubai and Sharjah and drove around in the 4A, 4H and 4L modes. Flotation is quite good and the only things to keep in mind are a longish front overhang and the lowest point of clearance being only 8.7 inches. Despite this it moves pretty well and keeps the occupant in reasonable comfort. The automatic four-wheel drive system has a two-speed dual range transfer gearbox which has an intelligent locking center multi-disc differential that can "torque bias" in Auto mode and can send upto 100% of the torque to the front wheels if needed. The dedicated microprocessor with the control software allows the system to detect different terrain and surface conditions to predict traction loss before it happens. In various uphill climbs that we did, the 4A (Auto) mode produced faster climbing times that the 4H (lock) mode. Here are a couple of videos to demonstrate:

The Four-wheel electronic traction control simulates front and rear differential locks by applying brakes to the wheel with less traction and hence sending the power to the wheel with more traction allowing a four-wheel drive Expedition to keep moving, even if only one wheel has traction, no matter which wheel it is. The system also allows the Expedition to keep moving even if two of its drive wheels (one front, one rear) are airborne, completely off the ground. Using the ABS brakes rather than mechanical limited-slip or locking devices inside the axle differentials gives quicker response, more seamless performance, and enhanced durability. This traction control system is turned off in 4L mode and cannot be switched off manually.

The four-wheel independent long-travel suspension is a purpose-built version of race suspensions found on off-road desert race vehicles and has a full 9.4 inches of suspension travel (how much the wheels can travel up or down) making it capable to traverse uneven terrain for improved control and ride quality.

Expedition 4x4s are tested alongside the F-150 and Super Duty trucks at Ford’s California and Arizona proving grounds. Expedition is put through the same durability tests and evaluations to meet the same durability standards as its pickup truck cousins. It comes with off road under body skid plate protection.

The interior space and comfort is abundant even in the third row of seats which is spacious enough for three average built adults and can also takes child car seats and not cramp their feet. The A/C works pretty well most of the time but when the car is parked in sun or is driven around town in the Dubai afternoon heat, it takes a while to cool down. However if the engine is kept above 2000 RPM it quickly cools down. The only thing that the top two trims with leather seats could do with is the seat cooling system which is available only in the Lincoln Navigator here. However the front dash board material and fit is not what a vehicle in this class should have. It appears to be of much inferior quality and fit that even the 2nd generation Expedition and squeaks and chirps at the slightest touch. The buttons on the steering wheel are quite small even for my little fingers and have to pressed hard for action.

The Expedition comes with the Ford SYNC factory-installed, integrated in-vehicle communications and entertainment system that allows users to make hands-free telephone calls, control music and perform other functions with the use of voice commands and  provides the  drivers the ability to operate Bluetooth-enabled mobile phone and digital media players in their vehicles using voice commands, the vehicle's steering wheel, or radio controls. It can also ‘vocalise’ the text messages received by the user along with other functions like vehicle health report, traffic etc.

At the base price of AED 125,000 the Expedition is a lot of car for money. The other trims being the XLT at AED.139,000 , AED. 149,000 for the XLT Leather and AED 189,000 for the Limited. The standard equipment across the entire range includes keyless entry keypad, heated power mirrors, air conditioning, an electrochromic rearview mirror, illuminated visors, and a leather-wrapped steering wheel, while Ford's MyKey system and SecuriCode keypad-entry system are standout features.