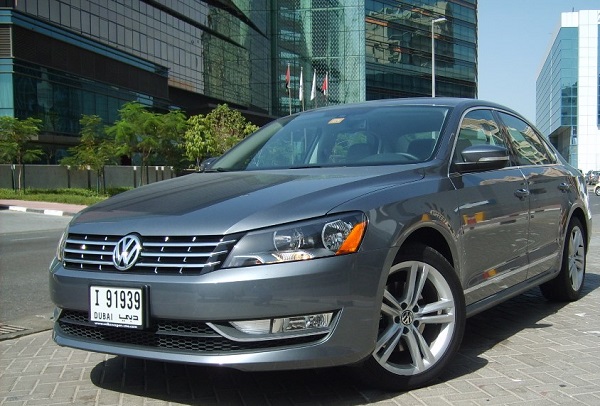 In the last couple of years, VW has woken up and decided it wants to have a slice of the D-segment pie and try and nick a fair share from the Altima, Accord, Camry, Malibu and the upstart Koreans, Hyundai and Kia.

I must admit that I am a self-confessed petrol head. When it comes to cars, I usually make decisions with my heart. So the thought of testing any car with the badge ‘Sport’ attached to it is always an appealing thought. Boy was I wrong. For readers looking for something sprightly to drive, please look away now as this is certainly not the car for you. The Passat is one of the most regular, average drives I’ve had in a long time and no matter how eager you are with the car, it does everything it can to give you a "non-Sport" regular drive.

I’m always a little ashamed to admit this, but my day job is as an auditor. My day job requires me to be subjective and make sensible decisions with my head based on hard facts and cold numbers (I assure you, it’s not at all exciting). And to the auditor in me, the VW Passat was one of the most appealing cars I’ve seen in this segment.

The Passat is not a pretty car. I’ll be the first to admit that. However, it is extremely handsome, holding its own on the streets. Its uncluttered lines stand out among a sea of overtly stylized cars that appear to try too hard (I’m looking at you Altima) or have one too many design features from their stable mates (that’s you Mr Malibu and your Camaro-esque taillights). Where it really stands out though is when you open the doors and get in.

With new and updated models in this segment coming from all manufacturers, the level of quality and equipment level have significantly risen in the last few years. However, as Audi comes under the VAG group owned by Volkswagen, the Passat benefits from a parts-bin of top notch material that is hard to beat at any level. What this translates into is an interior that feels a couple of rungs up the ladder, even when looked at against cars that are from a more premium segment. A stand out aspect is the sheer amount of room inside the car. Front seats are electrically adjusted (and heated for good measure in our scorching Dubai heat!) and allow you to get comfortable very quickly. The steering wheel adjusts for reach and rake facilitating the same. And once you are as comfy as can be, you could easily fit Shaquille O’Neil and his twin brother in the back and they’d still have enough place to toss a basketball around. Saying those rear seats are spacious is an understatement. There are acres of room in the back seats and the longest of legs will fit easily behind the tallest of drivers. Bravo!

The problem comes when you twist the k….I mean push the button to start the engine. The 2.5 litre engine has 5 cylinders and ekes out a paltry 168bhp. With similar sized engines from all competitors making comfortably more horsepower with one less cylinder, it makes you wonder what VW were thinking. From the off, the car tends to feel sluggish. It does not get off the line in a very sporty manner (reflected in a quite disappointing 0-100 kmph time of over 9 seconds) and the engine does not seem keen to rev.

Once moving though, power is adequate. The car cruises along smoothly and its whisper quiet inside at highway speeds. Long hauls across the motorway are taken without skipping a beat. The car glides along with its extremely soft suspension (too much so, in fact) and its sipping fuel at just 6l/100kms (we averaged 9l/100kms with mixed driving). This is where the Passat excels. It does ‘regular driving’ very very well indeed. 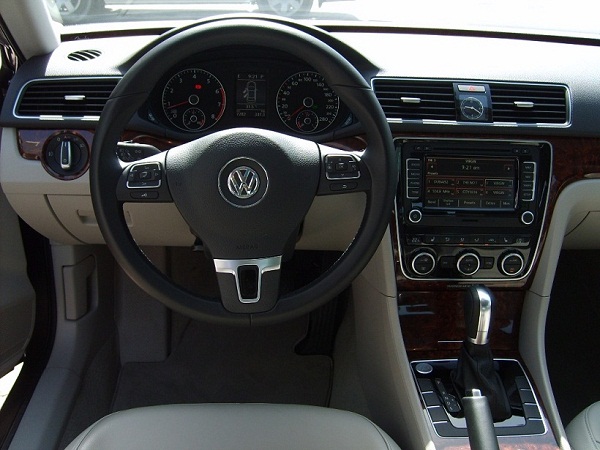 However, what the Passat is desperately begging for is a better engine. In the UAE, we get a single engine option which goes with the US spec cars available here. With VW playing host to some fantastic engines within its sister cars (example the 2 litre turbo in the Golf GTi or Scirocco), it’s a shame that the Passat has to make do with an engine that feels a bit archaic. While all competitors also flash bigger V6s with a healthier dose of power, the VW falls short with its single engine option in the local market and hence may not be able to acquire as big a slice of pie as it first set out to get. This is probably so that it does not step on the toes of its stylish brother, the Volkswagen CC, which uses the better engines but also comes in at a higher price tag of over AED 150k.

At AED 120,000, the car does compete with the high end versions of its competitors. However, where the Passat does claw back come brownie points is with the fact that it offers you a 3 years/45,000kms service contract and a 5 year unlimited mileage warranty.

If you are in the market for something peppy and enjoy the occasional spirited drive when the family is not in tow, then walk away now. However, if you are not a closet Schumacher and if all you want is a quiet, spacious, quality set of wheels to get you from A to B in serene comfort and without having used a tanker full of petrol, you could not do much better than the Passat.