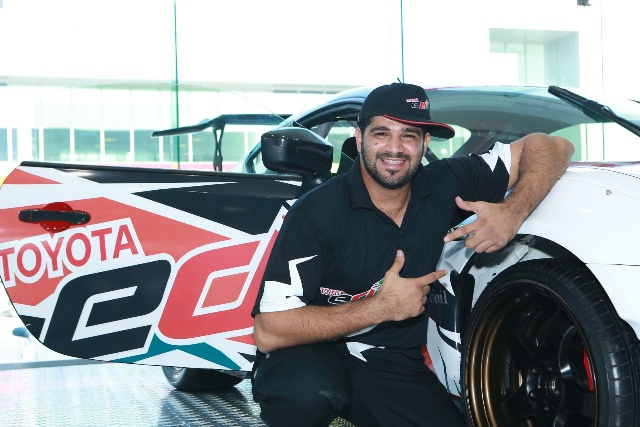 The unveil took place during the opening of the new Toyota showroom on Sheikh Zayed road, on November 5th in the presence of Al-Futtaim Motors senior officials, Toyota Motor Corporation  delegation and the media.

Ready to shake drifting fans by its appearance, roaring engine and amazing drifting capacities, the Toyota EDT 86 has been modified to fit the highest international specifications of drifting and FIA safety standards.

Simon Frith, Managing Director, Al-Futtaim Motors commented: “Al-Futtaim Motors Toyota is delighted to endorse this project and support Ahmed al Ameri in this increasingly popular sport. Ahmed Al Ameri is an icon for most of the Toyota 86 fans in the UAE. With the modifications he did to Toyota EDT 86 we can only but believe that he will be collecting more silver ware to his already huge collection of trophies. We wish him all the best.”

“I grew up with a deep affection for cars and drifting. Driving sideways was almost all I was passionate about. Today marks the second step towards completing my dream of having a professional team, driving a car that is so close to all drifters’ hearts, the Toyota 86. This car was only made possible with strong key support of Al-Futtaim Motors Toyota,” Ahmed Al Ameri said.

He added: “I like to take this opportunity to thank Al-Futtaim Motors Toyota for the confidence they have in our team and for providing us with the support we needed to complete this project.”

Another key modification on the vehicle - brain of the car- is a highly sophisticated engine control unit (ECU) that is tuned by one of the best programmers in the GCC.  The car transmission is upgraded to a shift-up shift-down clutch-less system also known as ‘Dogbox’.

The soul of the 86 is the 2JZ engine upgraded with a full stroke kit that has enhanced its capacity from 3000cc to 3400cc. 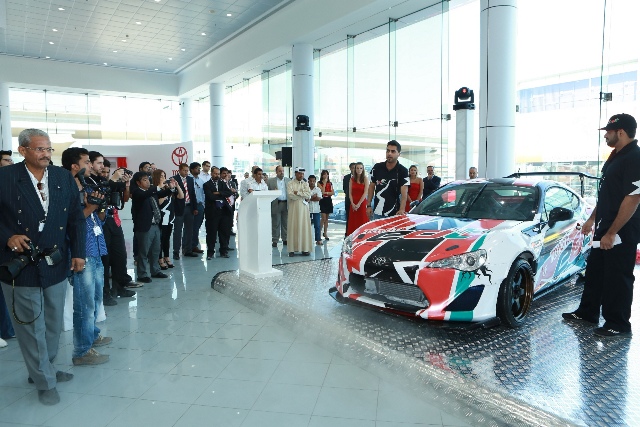 Toyota EDT chose a turbo charger that boosted the car’s BHP to reach over 600 horses. “This process was very challenging given the harsh weather conditions of the region. We wanted to ensure that our 86 maintains its top performance at all times, hence, we had to make a lot of modifications to the cooling system to ensure the car maintains a stable and cool temperature while being driven,” Al Ameri commented.

Three important fixtures were specially customised for the car, starting with a rear radiator system, which also required a balance and special aerodynamics because of the rear radiator system installed in order to keep it cool at all times and ensure that Ahmed Al Ameri enjoys a smooth and cool ride in the Toyota EDT 86. The oil cooling system was kept in the front to help increase the performance.

The water pump was changed to an electronic one in order to deliver the water to the rear radiator in a smoother manner. The capacity of the alternator was changed from 90 amps to 170 amps to ensure that the electricity produced is sufficient to keep the car running at its best.

In order to increase the car’s performance and handling, Toyota EDT added the “Rocket Bunny” body kit, which was further customized to fit the car’s specs.

Toyota EDT 86 was modified to reach from 0-100 km/hr in less than four seconds, and a top speed of over 300 km/hr which will ensure that its presence will never be missed. The car was modified by three Emiratis, three Australians and two Norwegians.

“This project required a lot of time, effort and most importantly teamwork. But I am sure everybody will be rewarded with Toyota EDT 86 reaching top spots in the upcoming drifting championships” Al Ameri concluded.